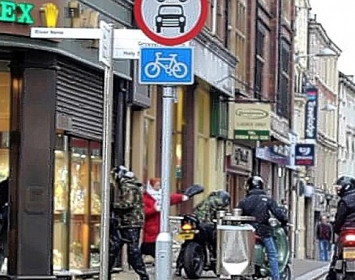 Goodness gracious — Granny to the rescue!

Ann Timson, a grandmother in her early seventies, beat thieves away from a jewelry store near London with nothing more than a black handbag and a whole lot of attitude.

She’s getting a whole lot of attention, too. News outlets are telling the story not only in Europe but also in the U.S. and Canada. Like CBC — reporting it’s not the first time this granny was a vigilante.

ANCHOR: "You go grandma! I can’t believe it. Not only this one incident but we’ve since learned, Tom, that this isn’t the first time she’s tangled with criminals?
REPORTER: That’s right. Apparently she’s got a bit of a reputation in her town for fighting crime.

What is included in Grandma’s rep? The Telegraph found out — not only thieves but drugs and prostitutes, too.

"She had been instrumental in cleaning up a "no-go zone" which was known as the Jungle, helping to rid the area of up to 200 prostitutes and dozens of drug dealers … Despite being threatened on countless occasions, at times at knifepoint, they said she remained fearless in her resolve against anti-social behaviour."

Morning shows were going gaga for the Grandma, each one with new information. The Today Show says Grandma’s got guts.

REPORTER: "The thieves had sledgehammers, Timson had a handbag."
STORE MANAGER: "Amazing, amazing, I mean the courage shown to do that."
REPORTER: "Recently there’s been a spate of daytime heists in Britain. Perhaps now thieves will think twice."
SHOP OWNER: "I think she was brave. I certainly wouldn’t have done the same."
REPORTER: "And that’s just it. Very few people would have. Very few people are . . . Super Gran."

The Early show quotes her as saying "I’m not a hero". Good Morning America reports on why she got involved.

"Broad daylight, a violent robbery in full swing, out of nowhere — a galloping granny. ‘Mother’s instinct’ Super Gran says, ‘just took over’. She thought someone was getting beat up, she soon realized it was a robbery, but ‘I was in full flight’ she said, "I started wacking."

Even evening news shows found time for Timson, something CBS Evening News reported she might not want, quoting her as saying she "wants nothing more than her quite life back."