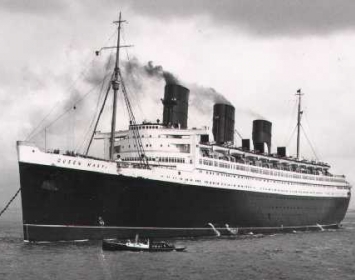 Set against the backdrop of the dramatic Long Beach city skyline, the Queen Mary ship has been a coastal icon in California since 1967. She was purchased by the city at a cost of $3.5 million, and has been a tourist attraction and hotel ever since.

Veronica Hill of California Travel Tips tours this massive ship and learns a little bit more about its ghostly residents and the Queen Mary history.

Listed on the National Register of Historic Places, the Cunard Queen Mary launched at Clydebank, Scotland in 1934, and was the most luxurious ocean liner of Her time.

Roughly twice the size of Titanic, the RMS Queen Mary sailed the Atlantic for White Star Lines between 1936 and 1967.

Designed in the Art Deco style, this ship boasted the finest materials and modern comforts, including puncalouvers for air conditioning and a choice of fresh or salt water in the bath.

During its heydey, the Queen Mary carried famous passengers such as Fred Astaire, Greta Garbo, and Winston Churchill, who signed D-Day invasion plans right on the ship.

In fact, during World War 2, the Queen Mary became a troopship, swiftly transporting as many as 16,000 soldiers at a time. She was one of the fastest and largest ships in the War.

Adolph Hitler offered a $250,000 bounty for the ship, which was nicknamed the Grey Ghost. The Queen Mary weighs over 81,000 tons and stretches more than 1,000 feet.

Today, the Queen Mary Hotel in Long Beach offers a bit of nostalgia in a very modern city, with several fine restaurants and 365 updated staterooms, complete with flat-screen TVs and iPod docking stations.

Check out the Upper Deck, where you can get great views of the Long Beach skyline, then head over to the Observation Bar, which was once the First Class Lounge. In the Verandah Grill, you’ll spy a famous painting of Marie Antionette with a mouse in her hair.

Dozens of Queen Mary tours are offered day and night, but by far the most entertaining are the Queen Mary ghost tour and Queen Mary Dinner with the Spirits Tour, hosted by paranormal expert Erika Frost.

The paranormal investigation starts out with a gourmet Continental meal at Sir Winstons, which is worth a visit even if you don’t go on the Queen Mary tour, followed by a 2-hour exploration into the most haunted Queen Mary hallways and rooms.

Walking down into the ships engine room, Frost uses dousing rods and a recording device to connect with the most famous Queen Mary ghost John Pedder, who was killed during a drill in 1966.

“John got crushed in a door during a game of chicken or last man standing with friends,” says Frost. “He is the Casper of the Queen Mary. John is a person who’s in transition, he’s a lot of fun.”

Other ghost sightings include soldiers marching down empty hallways, a man wearing black boots in the restroom of Sir Winstons, and a very angry spirit named Henry who is believed to haunt the ships Green Room.

“Henry is bald, about 6 foot 3, and he’s just angry,” says Frost. “He is very bitter very angry, negative. He’s upset and frustrated by the fact that he was killed doing something he was passionate about, which was working in the boiler room. From what I understand a boiler exploded and he was scalded. I don’t usually open myself up to communicate with him. I try to focus more on the positive side of things, but it is a bit of an adrenaline rush when he comes around.”

We never did see any ghosts, but I did capture some weird green lights in the Engine Room.

Was it a ghost or a reflection? You decide!

TRAVEL TIP: Be sure to save your parking ticket stub on arrival. A lost ticket will cost you $85!