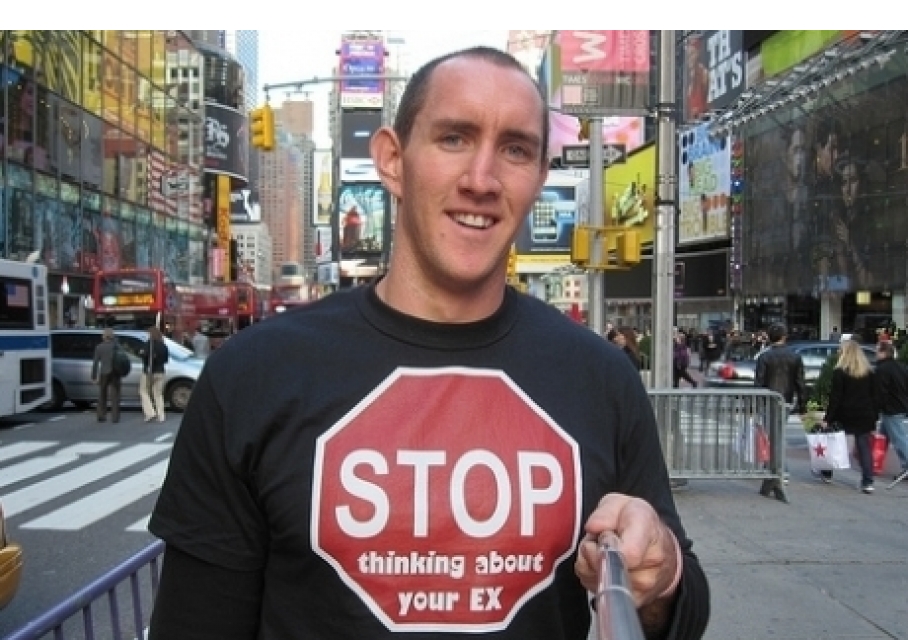 “I’m in Times Square, look at this look at this. This is the miracle of my job, it goes every where, shirt of the day Divorce Detox.com”

It’s quite the lucrative enterprise, Sadler charges his clients face value of the day so January one costs one dollar December thirty one is three hundred and sixty five dollars.

“ It doesn’t seem like much but it’s sixty six thousand seven hundred and ninety five dollars at the end of the year, Plus I do monthly sponsors of fifteen hundred so that’s another you know eighteen thousand dollars on top of it.”

All days are up for sale, no exceptions.

“And I don’t take the shirt off, you know I’ve had weddings and a funeral, a couple of other things, I wear the shirt no matter what.”

Sadler wear the shirt all day which which he promotes via social media like face book and Twitter. Every afternoon at three he presents a YouTube video to talk about his T-Shirt.

“And, I am in central park wearing my stop thinking about your Ex for divorce detox.”

Sadler set up his company I Wear Your Shirt Dot Com in late two thousand and eight. His clients range from companies and lobby groups, to artists and celebrities. Sadler’s already sold most of his days for two thousand and ten. But plans to recruit another staff member, who will wear identical shirts in California.

“I would love to get a job like yours, where can I sign up?” “I wear your shirt dot com.”

Nice work if you can get it. Gemma Haines – Reuters.