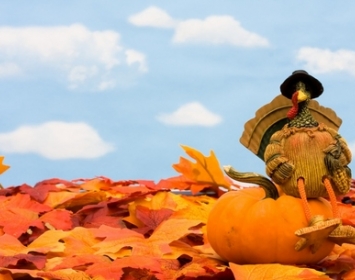 What is the traditional main course of Thanksgiving Day?
Turkey.

What’s the name of the ship that transported the Pilgrims to Plymouth?
The Mayflower.

Who was the Pilgrims?
English separatists in the east Midlands who didn’t want to conform.

Who was the president when Thanksgiving Day was made federal holiday?
Franklin D. Roosevelt.

What’s happening, when the president „pardoning” a turkey in a special ceremony?
One fortunate turkey spared and gets to live out his days peacefully on a farm.

The main course is the turkey. It is often filled with stuffing and served with mashed potatoes and gravy, cranberry sauce, various vegetable dishes, and pumpkin pie for dessert.