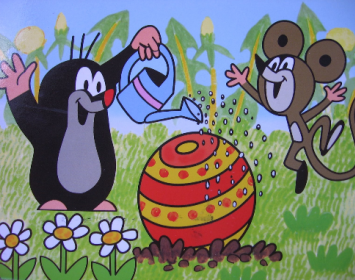 It was first to be seen in 1956 in  Prague, when Miler wanted to create a children’s cartoon about how flax is processed. He wanted a strong Disney-influence to the cartoon by choosing an animal for the leading role, and decided to pick a mole after stumbling over a molehill during a walk. The first film called "Jak krtek ke kalhotkám přišel" ("How the mole got his pants") was released in 1956, and the cute main character won itself an enormous popularity in many Eastern European countries as well as Germany, Austria, India and China. Production for further episodes started in 1963 and since then, around 50 episodes have been created.

The first episode of the cartoon was narrated, but Miler wanted the cartoon to be understood in every country of the world, so he decided to use his daughters as voice actors, reducing the speech to short non-figurative exclamations in order to express the mole’s feelings and world perception. They also became the bottleneck of the creation process as they were the ones who got to see the whole film first, thus Miler was able to decide whether the message of the movie was able to get to children or not.

"It took me a long time to realize it, but when I draw Krtek, I am drawing myself." Zdeněk Miler