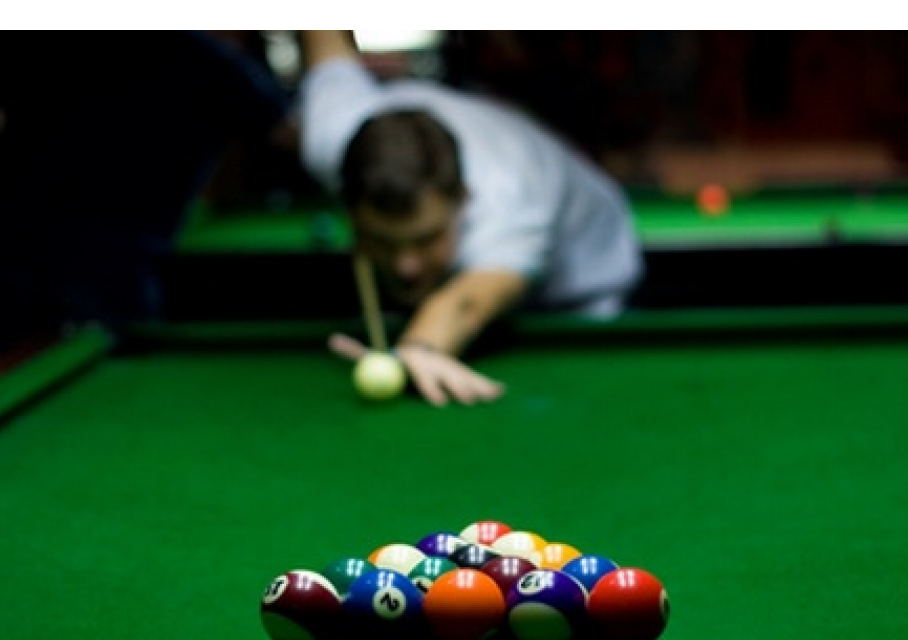 Step 2: The Shots you will need
There are a number of shots that you will find useful when playing pool. Here are some of the more simple ones so they should be fairly easy to get the hang of.
The Break
The Straight Shot
The Bank Shot
The Slice
and The Canon.

Step 3: Before you start
First you will need to prepare the cue. Hold the cue in one hand with the tip pointing up, with your other hand take the chalk and rub it over the tip of the cue (ensure that the whole of the tip is covered with chalk). When you have done this, blow lightly across the face of the tip to blow off any excess chalk.
Before you hit a ball, always check that the tip is screwed in securely to the end of the cue. The tip can sometimes work itself loose and even fall off, if this happens it will effect how you strike the Cue ball and put you at a disadvantage.

Step 4: The Break
Place the Cue ball behind the line, so the first ball it will make contact with is the ball at the apex of the rack. Then, with the tip of the cue strike the Cue ball, if you hit it hard enough the rack should be spread quite evenly around the table.

Step 5: The Straight Shot
This sounds like it should be very easy, but when the ball you are aiming for is at the far end of the table it does take a certain amount of skill. It is important to stay calm, as it is easy to get nervous especially if this is an important shot.
Use your cue to line up the shot between the cue ball and the ball you are aiming for, as it is sometimes hard to judge just with your eye alone.
Once you have decided on the angle of your shot bring the cue back and line up the shot. Ensure that you line up the tip of your cue with the centre of the white ball, if you do not strike the ball dead in the centre then the ball will head off at an angle, missing your ball. So before you take the shot check the position of the Cue ball and the position of the ball you intend to hit. Then, when you are sure you are lined up, take the shot.

Step 6: The Bank Shot
This is one of the most popular shots in pool, the basic idea is to either hit the cue ball so it bounces off a cushion and hits a ball. Or to strike the Cue ball so it hits a ball which then rebounds off a cushion. This is the basic bank shot, and is known as a double.
As before, use your cue to help you work out the angle of your shot by lining up your ball with the cushion to judge how it will bounce.

Step 8: The Canon
Now you know how to Slice it's an easy step up to the Canon. This is a useful shot if the ball you want to hit is blocked by one or more balls
Look at the balls in question, how do you want to hit the first ball in order for it to strike the second ball at the right angle, for that to maybe hit the third.
Once you have decided how to hit the Cue ball, hit it firmly, but not too hard as this may cause the balls to fly off around the table.

Remember, pool is a game of skill, so the more you practice the better you will become.

with the permission of Videojug