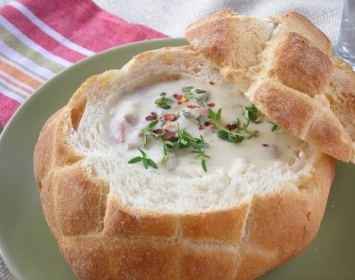 There are almost as many variations of this hearty soup as there are varieties of clams. Try this basic recipe for a satisfying, warming meal.

Discard any clams that did not open. Let the clams cool; then cut the meat out with a paring knife and chop coarsely. Wash the soup pot.

Dice the salt pork or pancetta and add to the soup pot. Cook until crisp.

Step 3: Add the onion and celery

Dice the onion and celery and add to the salt pork or pancetta. Cook until soft.

Stir in the reserved clam broth or bottled clam juice, plus the milk. Peel the potatoes and cut into cubes. Add them to the pot with the bay leaf and thyme and simmer until tender.

Wash the clams thoroughly under cold running water and add them to three cups boiling water in a large soup pot. Boil for three to five minutes.

Add the cream and the clam meat. Simmer and season with salt and pepper. Sprinkle with parsley and serve with oyster crackers. You’ll be saying “chowdah” before you know it.

Step 7: Save the clam broth

Remove the steamed clams and set aside. Pour off two cups of the steaming water into a measuring cup.m

Did you know? Hard-shell clams can live for 40 years.