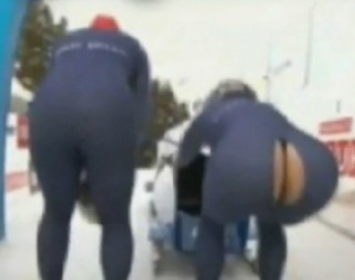 She was aiming for aerodynamic – instead, she got draughty. A video of a British female bobsleigh rider splitting her pants at the World Championships in Switzerland has become an overnight Internet sensation.

Gillian Cooke’s super-tight all-in-one split as she bent over just seconds before jumping into the bobsleigh with her team mate Nicola Minichiello. Despite being so suddenly exposed to the chilly air, she appeared to be unaware of what had happened.

The official behind her, however, was very aware. Later footage shows him trying to stifle his giggles as her black G-string is displayed. Despite the slip up Gillian and Nicola still manged to finish seventh at the championships which took place in St Moritz, Switzerland over the weekend.

The two Brit girls are due to fly the flag at the Olympics in Vancouver, Canada next month and hope to add to their gold medal from last year’s World Championships in Lake Placid.

Gillian is originally from Edinburgh and is the brakes woman for the bobsleigh which is driven by Sheffield-based Nicola. Today no-one from Team Minichiello was available for comment. Their website made no mention of the incident.

flag someone or something down
to signal or wave, indicating that someone should stop.

drape/wrap yourself in the flag
to pretend to do something for your country when you are really doing it for your own advantage.

Put the flags out!  (British humorous)
something that you say when you are pleased and surprised that something has happened.

wave the flag / show the flag
to defend and support someone or something.

wrap yourself in the flag
to say that that your beliefs or actions are only to benefit your country.