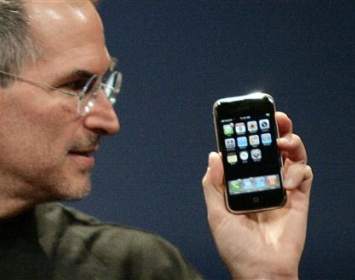 -
Facebook
You’re watching multisource business news analysis from Newsy The news of Steve Jobs’ medical leave of absence rocked the tech and business world this week. With this latest announcement, many are left wondering, ‘How strong is Apple without Jobs?" According to USA Today, Apple has the second highest market cap in the country. CNBC reports,

The news of Steve Jobs’ medical leave of absence rocked the tech and business world this week. With this latest announcement, many are left wondering, ‘How strong is Apple without Jobs?"

According to USA Today, Apple has the second highest market cap in the country. CNBC reports, while the company itself has taken no hit, the effect of its leader’s absence is feared to have a strong psychological impact on the market.

"Jobs is seen as being very much intertwined with the company and certainly the short message that he did put out indicated strongly his love for the company which certainly has been something that he’s founded and obviously his presence there has meant a great deal not only to investors but consumers at large."

Quarterly reports released Tuesday were the first indication of how much Jobs’ absence could affect consumers. While sales were up 50%, and shares were up 62% over the last 12 months – by midday trade, Apple’s shares were down 3.4%. A writer for The Guardian says:

"Despite the announcement about Jobs, analysts such as Kaufman Bros and Thinkequity raised their long-term forecasts for the share price, to $415 (up $10) and to $390 (up $15) respectively. Most analysts reckon the stock could still head towards $390, which would put it close to Exxon’s world-leading $392bn market capitalisation."

While the company is still expected to trade well in the short term, one of the biggest question marks remains Apple’s future product development. Many of the gadgets that have boosted Apple to the top of the tech world were born in Jobs’ brain. CNN asks, with the visionary out of the game, what happens in the next couple years?

So there are plenty of new toys to look forward to. That’s the good news. The bad news, according to The Wall Street Journal, is without Jobs, Apple may have a much harder time breaking into new territory.

"Consider what some hope will be Apple’s next breakthrough: television. The impact of a Jobs absence could be huge. Turning Apple TV into a must-have product like the iPhone or the iPad depends on Apple persuading entertainment companies to make their content available at attractive prices. … Apple would have a hard time succeeding in this effort without Mr. Jobs, who is the biggest shareholder in, and a director of, Walt Disney Co."

Finally, one analyst on CNBC says, with the future of Apple riding on the confidence of it shareholders, Jobs ought to be giving them a little more information to work with.

"I think Steve Jobs is treating shareholders as if they were children, and he’s gotten away with it for years because he keeps giving the children delicious candy- in terms of great returns. With $300 billion of investor money on the line, we deserve to know more as it happens."

So, ready to sell your shares of Apple with Jobs absent from the helm? Or is this tech giant bigger than one man?