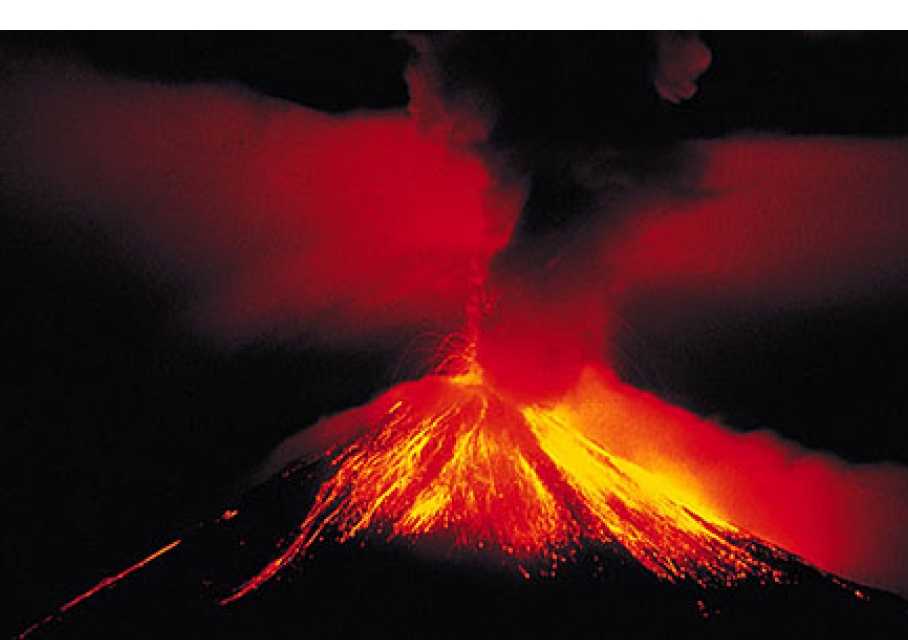 Lava (láva): Magma that has reached the surface of the earth. It cools as it is exposed to the atmosphere.

Volcano (vulkán): A mountain composed of cooled lava built up by repeated eruptions.

Crater (kráter): A steep-sided hole at the top of the volcano that sometimes contains a pool of lava.

Vent (a vulkán szája): The opening in the earth that allows the magma to flow out on the earth's surface.

Volcanic dust (vulkáni por): Very fine fragments of debris, up to .25 millimeters in diameter, which is shot into the atmosphere during an eruption.

Volcanic ash (vulkáni hamu): Somewhat larger volcanic debris, up to 5 millimeters in diameter, which is shot into the atmosphere during an eruption.

Volcanic bombs (vulkáni bomba): Debris from an eruption that is larger than 5 millimeters.

Cinders (vulkáni salak): Smaller pieces of debris too small to be called a "bomb."

Shield volcano (pjazsvulkán): A shield volcano covers a large area, is dome-shaped, and has gently sloping sides. The lava is dark, thin, and runny so it flows quietly from the vent. Mauna Loa in Hawaii is an example of a shield volcano. Mauna Loa also is the largest volcano on earth. It makes up about 1/2 of the area of the island of Hawaii.

Composite Cones-- Large cone-shaped mountains with steep sides. Eruptions from composite cones are violent, sending up volcanic bombs, cinders, and ash. A quiet volcanic flow usually follows the explosion and helps to build up the mountain. Mount St. Helen's in Washington and Mount Vesuvius in Italy are examples of composite cone volcanoes.

Pacific Ring of Fire (pacifikus tűzgyűrű): The ring of volcanoes that circle the Pacific Ocean from the tip of South America, along the west coast of the U.S., through Alaska and the Kamchatka Peninsula, down through Japan, Indonesia, and the islands in the South Pacific.

Volcanologists (vulkanológus): Scientists who study volcanoes. They monitor volcanoes to try to warn people when eruptions are about to occur and to learn more about how the earth works. 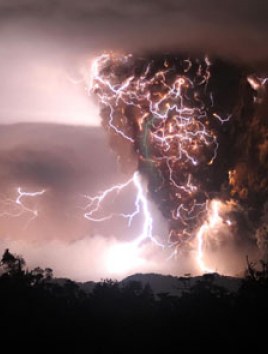