Going back to school is not always easy for kids. They’re not happy about leaving behind the summer fun and taking up the good old school routine again. School can be sometimes boring, sometimes tiring, but children cannot escape it. When people think of schools what comes to mind first is children sitting in rows of desks facing a blackboard. But that’s not always true, there are some quite unusual schools in the world. Here are 10 of them. 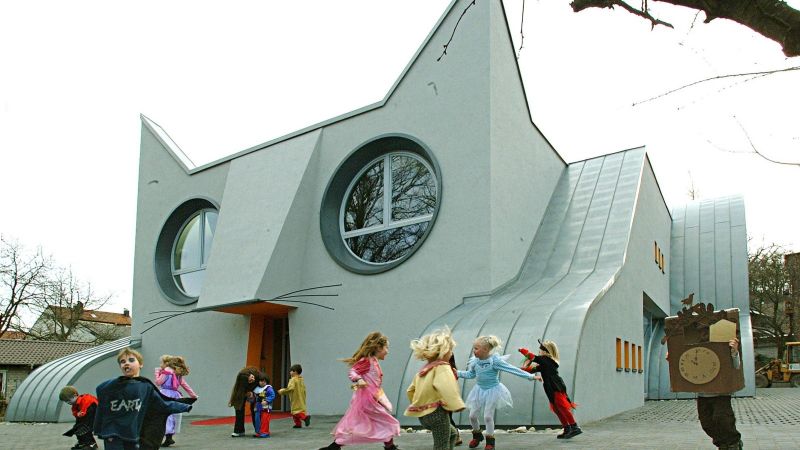 A school in Germany has been built to look like a giant white cat, complete with whiskers and circular windows for eyes. When students arrive at the school, they enter the building through the mouth of the cat. Once inside, it’s just like any other school. But there’s at least one more feature that students can enjoy: the cat’s tail found at the back of the building doubles as a slide.

A school in the Philippines is made entirely of recycled pop bottles. It took about 9,000 bottles and dozens of volunteers to build the structure. Each bottle was filled with sand, water, and straw to keep them sturdy. Then a cement-like substance was used to hold the bottles in place as they were stacked on top of each other to create walls. 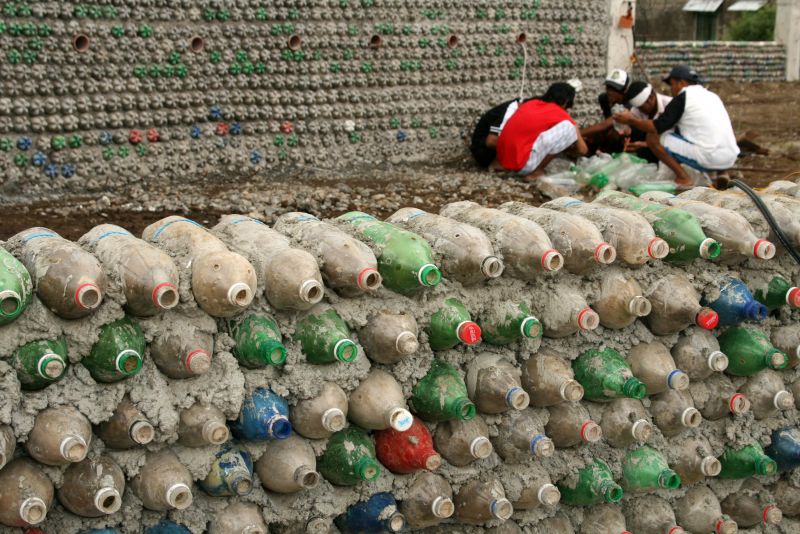 In a remote area of Colombia, kids have to travel to school on a zip-line. It turns out the steel wires are the only form of transportation for those living in an isolated valley called Los Pinos. Very young kids aren’t allowed to use the zip-line alone. So they travel along the cable with their parents or an older sibling. If the kids didn’t travel this way, they’d have to walk through the rainforest and it would take two hours to get to school.

Running track on the roof

When an elementary school in China was looking for a place to put its running track, it looked up, exactly four storeys up. The track was built on top of the school. To keep the students safe, large glass walls and sturdy steel rails have been put in place. The head of the school says the rooftop track is a perfect spot for gym class. 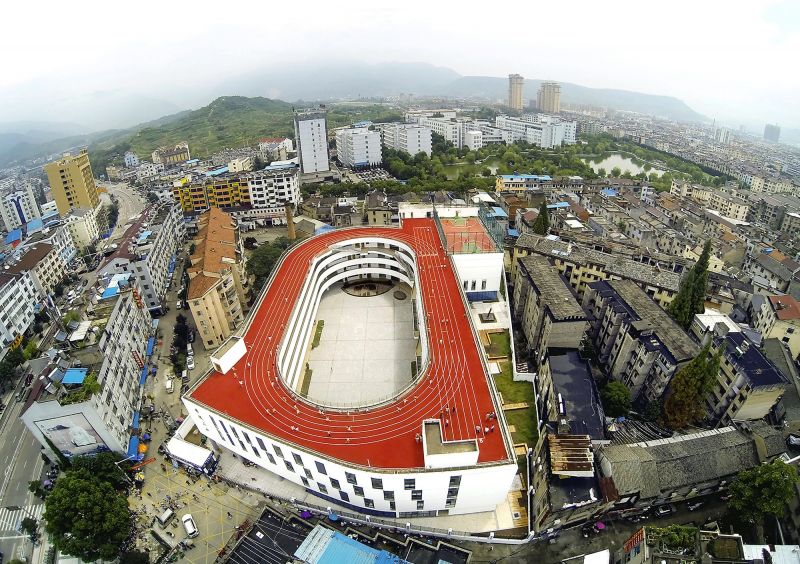 Does it sound too good to be true? That’s just what’s going on in a school in Stockholm, Sweden. Thirteen-year-old students at the Viktor Rydberg School spend part of their day playing Minecraft. Teachers say the game helps kids with their creativity and challenges their imagination.

Abo Elementary School is an underground school in the United States. At the height of the Cold War it was decided that they would build an underground school that would also function as a shelter. The school is completely underground. A playground was built on its roof. The school has three different entrances, each of which is protected by an 800-kilogram steel blast door. The school is reportedly capable of resisting radiation and withstanding a 20-megaton blast. It has a morgue, a generator, a well, its own ventilation system, and stockpiles of food and medication. Despite all of this, many of its students had no idea that they attended elementary school in a bomb shelter.

Twice a year, Bangladesh experiences floods which leave millions without access to clean water, electricity, and other necessities and it becomes difficult for children to attend schools. To combat the challenges a non-profit organization came up with a brilliant solution. They built schools that float. Each of these schools is solar powered and equipped with a laptop computer, Internet access, and a small library. The boat schools are a school and school bus hybrid. Whenever there’s a flood and every other service is closed for business, the floating schools are still operational. They pick their students up from docks and riversides, then dock somewhere so that class can begin. After school the boat schools return the students to their homes and another group of students is picked up.

If boats, why not trains? An Indian teacher helped to create special schools across India to help children educate themselves instead of begging for money. These train schools take place at train stops around India to help students who don’t have access to schooling due to financial constraints. So far these schools have offered education to 4,000 students as well as food and medication to their families.

Wouldn’t it be great to attend a school that was also a world class soccer stadium? The students at River Plate spend most of their time in Buenos Aires Stadium, which is the home of Atletico River Plate soccer club and a school for 2,000 people. Even though this is a rather creative approach to learning, it’s also challenging as sometimes academic sessions and soccer practice take place simultaneously, which means that sometimes lessons even finish early.

A Chinese elementary school is situated beneath a rocky overhang in Dongzhong and is believed to be the only cave school in the world. Dongzhong itself means “in cave.” With six classes and 200 students, the unique school offered children from remote villages a chance of an education. Some students spent up to six hours daily to travel to and from the school in the pursuit of knowledge. Unfortunately the school was closed after the Chinese government declared that the country is not ’a society of cavemen’. 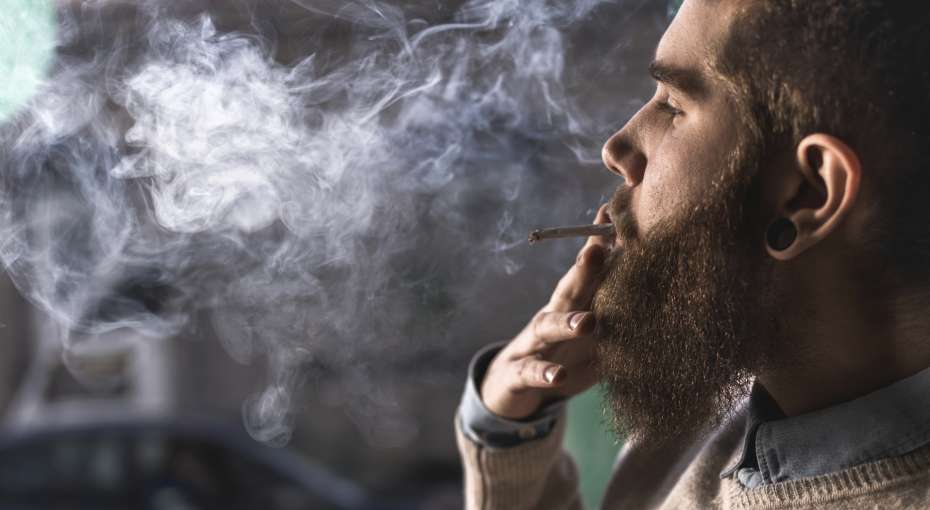 Parents asked not to smoke joints on the school run 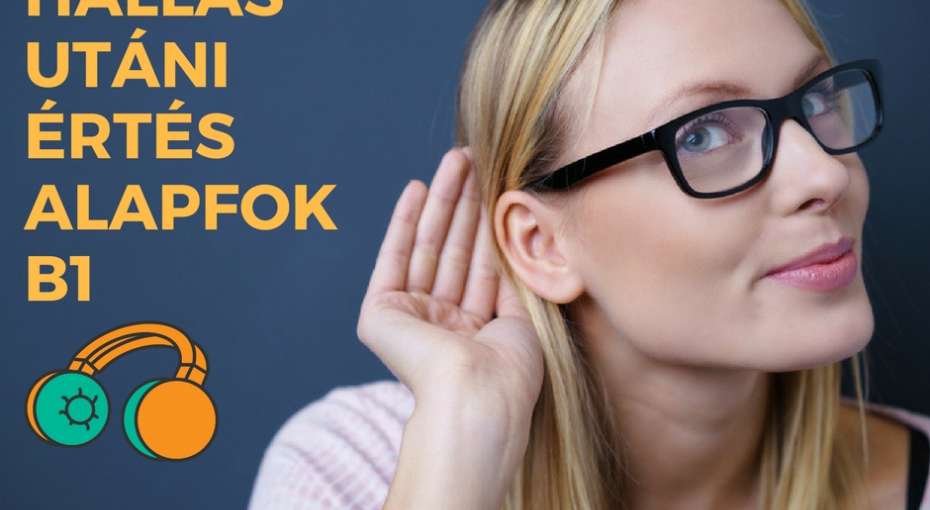 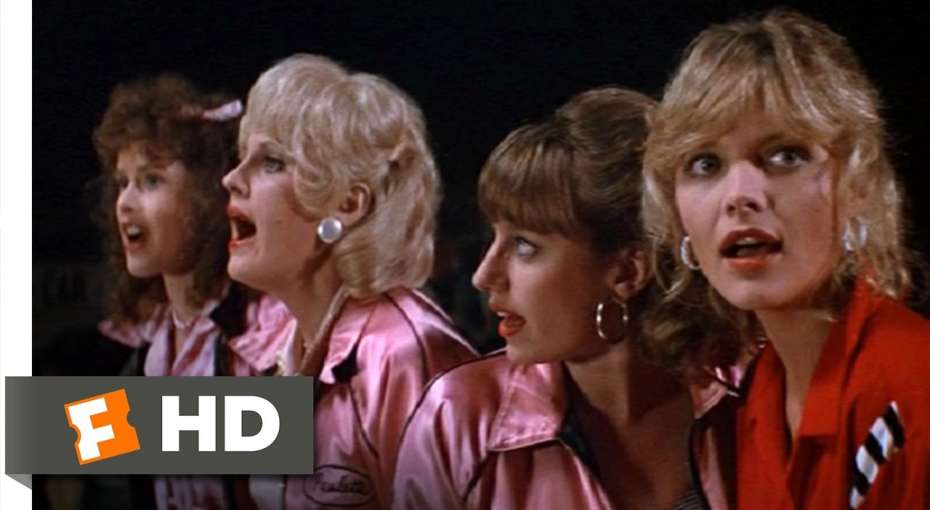 Grease 2 - Back to School Again