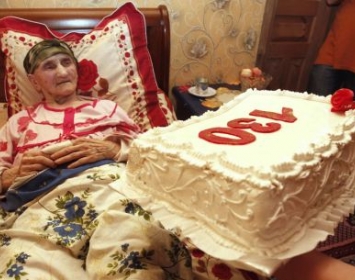 Authorities in the former Soviet republic of Georgia claim a woman from a remote mountain village turned 130, making her the oldest person on Earth. Antisa Khvichava from western Georgia was born on July 8, 1880, said Georgiy Meurnishvili, spokesman for the civil registry at the Justice Ministry. The woman, who lives with her 40-year-old grandson in an idyllic vine-covered country house in the mountains, retired from her job as a tea and corn picker in 1965, when she was 85, records say.

“I’ve always been healthy, and I’ve worked all my life – at home and at the farm,” Antisa said, in a bright dress and headscarf – and red lipstick. Sitting in the chair and holding her cane, Antisa spoke quietly through an interpreter – since she never went to school to learn Georgian and speaks only the local language, Mingrelian. Her age couldn’t immediately be independently verified. Her birth certificate was lost – one of the great number to have disappeared in the past century amid revolutions and a civil war which followed the collapse of the USSR.

But Meurnishvili showed two Soviet-era documents that he says attest to her age. Scores of officials, neighbors, friends, and descendants backed up her claim as the world’s top senior. The Gerontology Research Group currently recognizes 114-year-old Eugenie Blanchard of Saint Barthelemy, France, as the world’s oldest person. Antisa would make Eugenie look like a spring chicken – but the research group is yet to examine Antisa’s claim. She has a son, 10 grandchildren, 12 great grandchildren and six great, great grandchidren.

Her 70-year-old son Mikhail, who was also at the party, apparently was born when his mother was 60. She said she also had two children from a previous marriage, but says they died of hunger during World War II. Mikhail said that, although his mother had difficulty walking and had stayed largely in bed during the past seven years, she made a point of hobbling unaided to the outhouse on the other side of the yard, because she hates to be a nuisance.

Though her body has all but quit on her – her fingers cramped by age mean she can no longer maintain her love of knitting – relatives say her mind remains sharp. “Grandma has a very clear mind and she hasn’t lost an ability to think rationally,” said Khvichava’s granddaughter Shorena, who lives in a nearby village. To mark Antisa’s birthday, a string ensemble played folk music out on the lawn, while grandchildren offered traditional Mingrelian dishes like corn porridge and spiced chicken with herbs to all guests as the party.