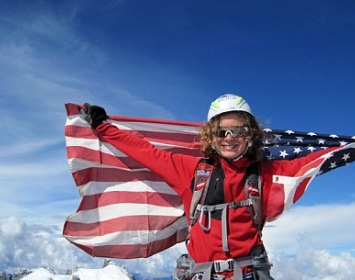 At the age of 13, boys are told they have the world at their feet. That could quite literally soon be the case for American boy, Jordan Romero, who is bidding to become the youngest person ever to conquer Mount Everest. This is no pipedream – the teenager was busy today in Nepal packing his equipment and discussing final details with the three Sherpa guides who will accompany him.

Jordan has already climbed the highest peaks on six other continents and hopes to complete the set by chalking off Everest in May. His team sets off from Kathmandu tomorrow en route to base camp on the Chinese side of the 29,035ft mountain. “I just wanted to do something big, and this was something I wanted to do for myself. It was all about the experience and I just happen to be 13 at this time,” Jordan said.

The record for the youngest climb of Everest is held by Temba Tsheri of Nepal, who reached the peak aged 16. Jordan, who climbed Mount Kilimanjaro in Africa when he was 10 years old, said he was inspired by a painting in his school hallway of the seven continents’ highest summits.

Everest, however, will be his first over 8,000 metres (26,240 feet). This will be a big leap, but we have been training for the altitude,” he said. Jordan said he would not take any unnecessary risks and would turn around if they encounter problems like bad weather. He said he read about past disasters on the mountain that claimed many lives and learned lessons from them.

“This may be the first of many attempts,” he said. “It could take a couple of years, but I am determined to do it. If I don’t reach the summit this time, I will try next time. I do feel ready. I feel very prepared emotionally, and definitely physically.” While he is acclimatising at the base camp before the May push to the summit, Jordan plans to do his algebra homework, some book reports and write a journal about his experiences.