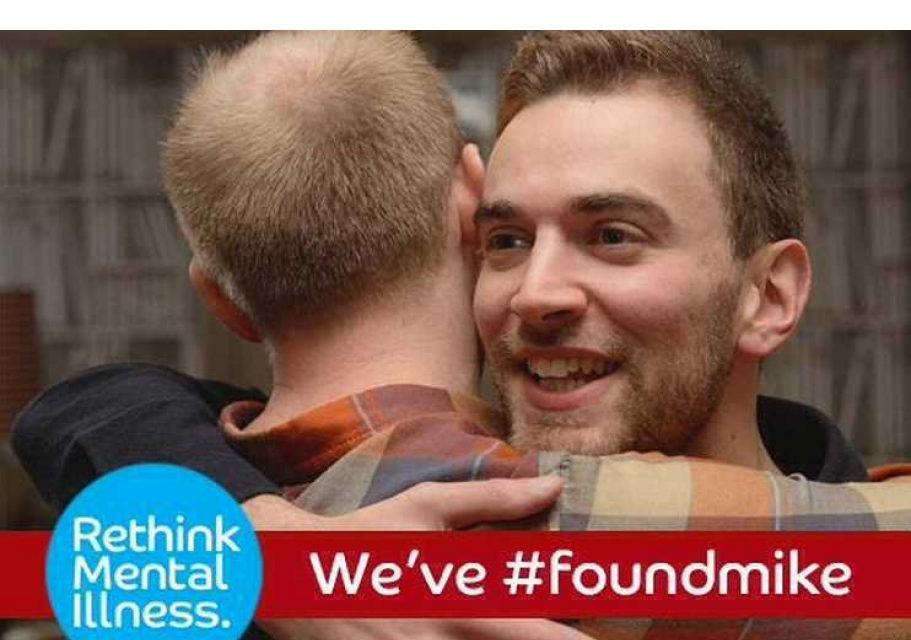 Six years ago, after Jonny Benjamin was diagnosed with schizo-affective disorder, he was convinced there was nothing left to live for. The Londoner decided he would go to one of the busiest bridges in the city, and jump. As he stood close to the edge, Neil Laybourn, a 31-year-old personal trainer, saw Benjamin, and was able to persuade him to reconsider, offering him a cup of coffee and kindness. Then, he disappeared into the crowd of morning commuters.

Benjamin couldn't remember the name of his hero or any other details about Neil Laybourn, but knew how lucky he was to be alive. So, for the last six years, Benjamin has been a voice in the community of mental illness, posting videos on YouTube and partnering with causes like Rethink Mental Illness, hoping his experiences can demonstrate to others that they're not alone.

A few months ago, Benjamin, decided to locate the man who was responsible for saving his life. He launched a social media campaign alongside Rethink Mental Illness called #FindMike, using the name Mike as a bookmark for the man whose name he couldn't recall.

And he created these flyers to put around the city: 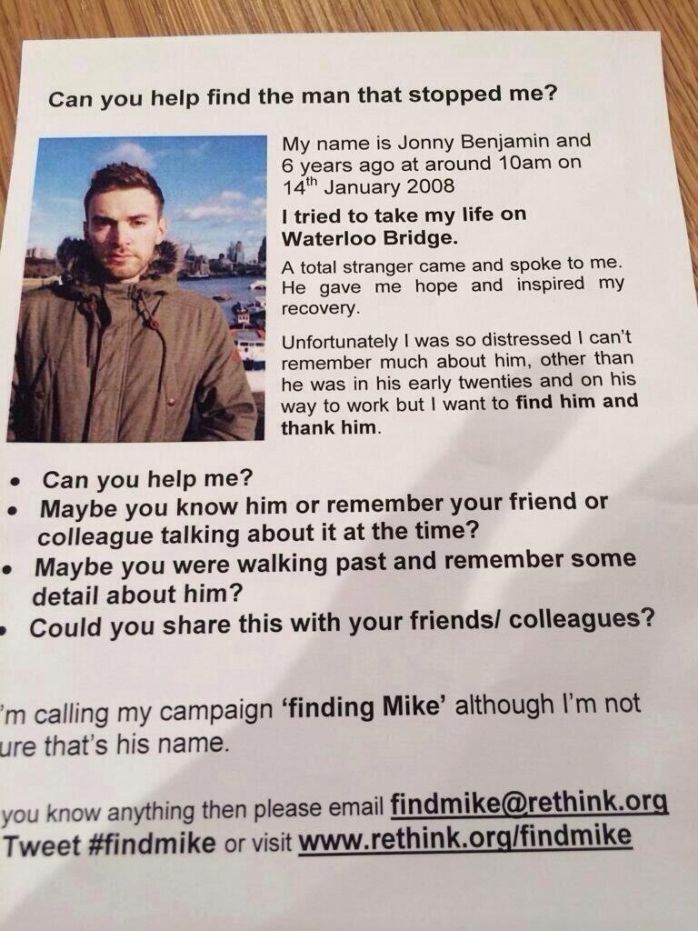 Yahoo reports the campaign soon went viral on Facebook and Twitter, attracting the support of celebrities from Boy George to U.K. Deputy Prime Minister Nick Clegg. Weeks went by and the campaign had spread to hundreds of thousands of viewers. Six years of wondering would be over, if people were compassionate and wanted to share Benjamin's story.

As luck would have it, the campaign soon made its way to Laybourn’s fiancée, who spotted the #FindMike update on Facebook. She immediately recognized the story, and told Laybourn, who reached out right away.

"I had thought about him over the years and had always hoped he was OK,” Laybourn, now 31, said in an official statement from Rethink Mental Illness.

The two reunited on Tuesday, giving their first joint TV interview two days later on the British morning TV program “Daybreak.” Benjamin thanked Laybourn on the broadcast, telling him, “You didn’t need to stop that day, and you did. And it was the kindness as well, the compassion. He was determined not to let me jump, and that was what pulled me back over the edge.”

1. Jonny Benjamin suffered serious injuries on a busy London street and he wanted to find the man who helped him.

2. He used the bookmark #FindMike because he wasn't able to recall the name of the compassionate man.

3. Jonny suffered from a mental illness and after the diagnosis he felt he had nothing to live for.

4. It was Neil's best friend who spotted the viral message to find Neil in Facebook.