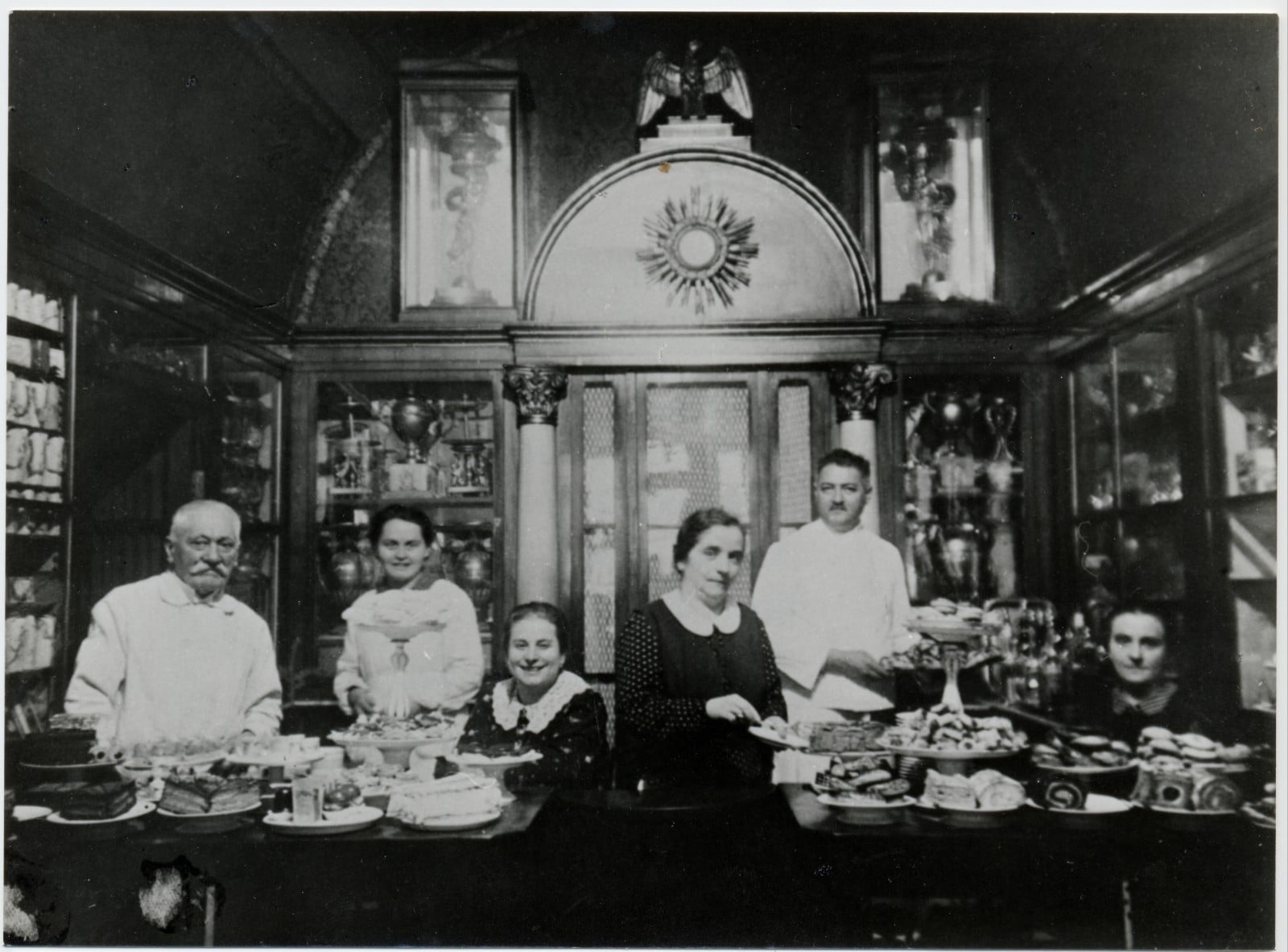 The yummiest confectioneries and cafés in Budapest

Rigó Jancsi, Dobos cake, Gerbeaud slice. Mouth-watering Hungarian pastries that are difficult to resist if you have a sweet tooth. But it’s not only the sweets that are tempting. The most famous confectioneries and cafés in Budapest are also a feast for the eyes with their architectural wonders in their interiors and exteriors. 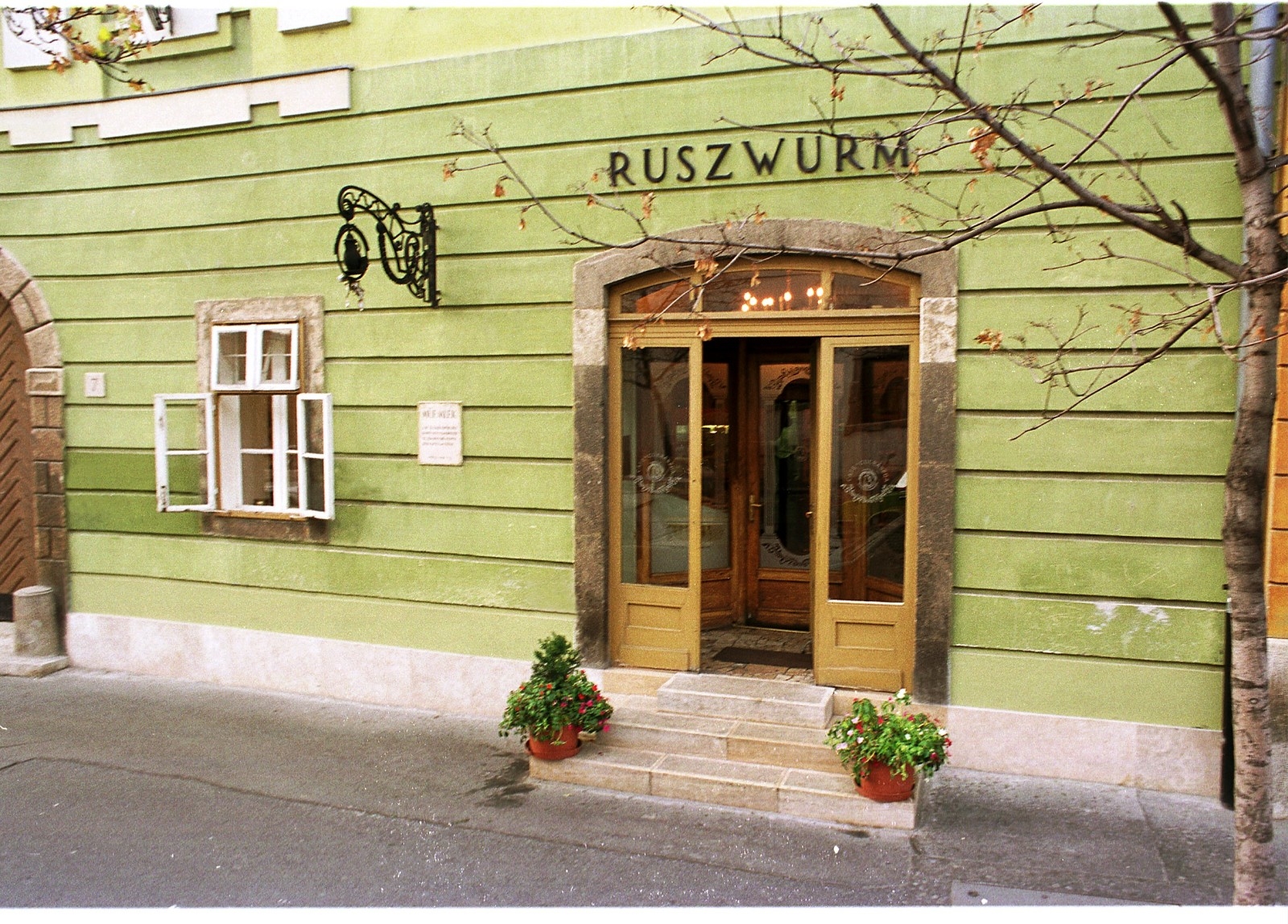 Located in the Castle District this beautiful confectionery is just a few steps from Matthias Church and Fisherman’s Bastion. When you enter Ruszwurm you will feel as if you have stepped back into the 19th century as their location hasn’t changed since then. It’s one of the oldest pastry places in Budapest. It has exquisite antique furnishings including a 200-year-old cherry-wood counter with mahogany inlay and with a fabulous old tiled fuel stove. The furnishings were designed and created by a cabinet-maker from Krisztinaváros and by sculptor Lőrinc Dunaiszky. The interior reflects the cozy Biedermeier atmosphere of the period when the consumption of sweet products was one of the most characteristic delights. Their most famous product is krémes (mille-feuille). Their pogácsa (salt puffs, a type of small, round salt cake) and rétes (strudel) are also worth tasting. Ruszwurm is the oldest family-run business dating back to 1927 when they opened their first confectioneries. The place is very popular it’s hard to get a seat especially at the weekends and sometimes you even have to queue. 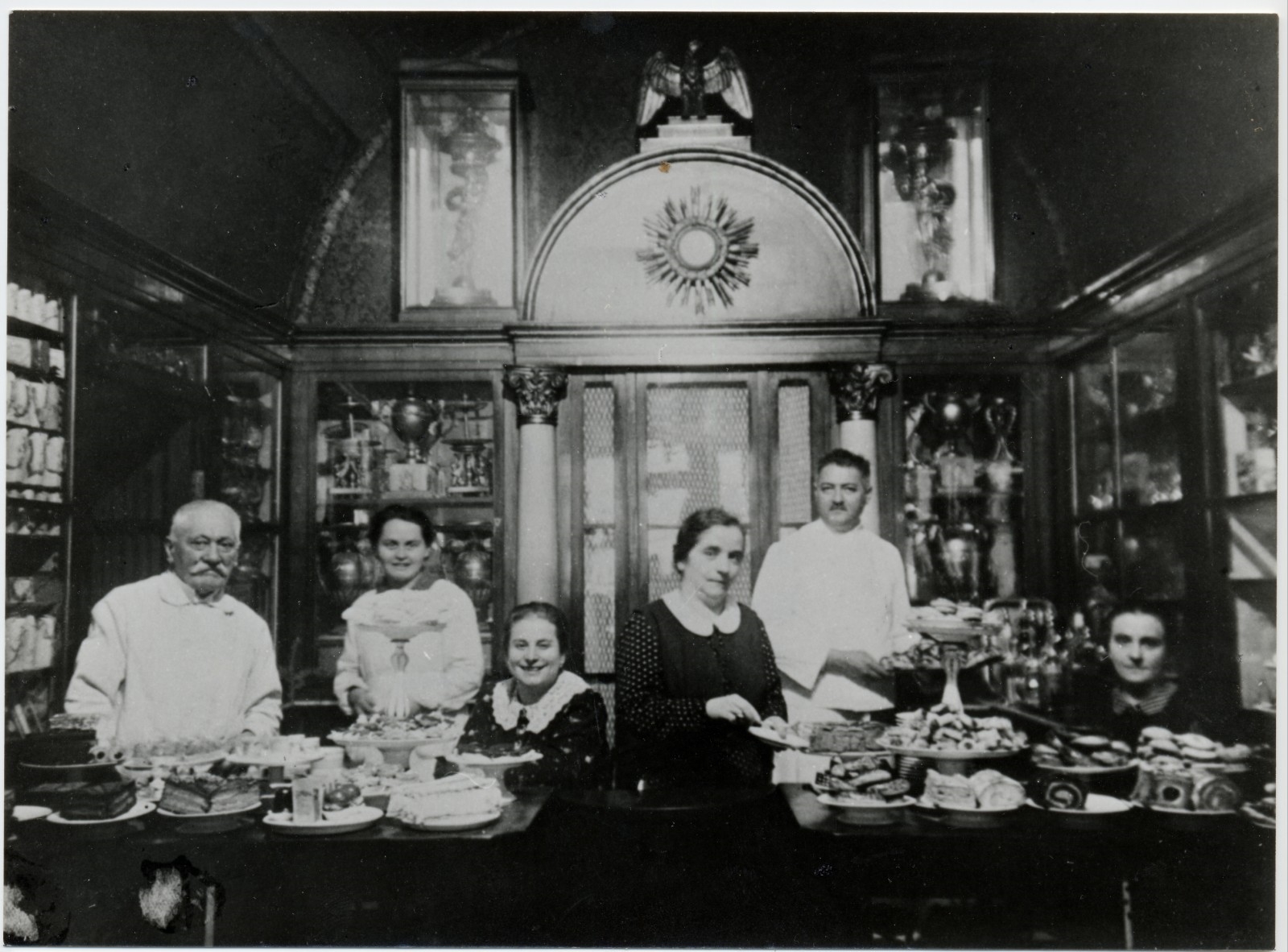 It is perhaps the most well-known confectionery in Budapest. It was founded by Henrik Kugler in 1858. Since Kugler didn’t have an heir, he sold the cafe to Emil Gerbeaud the descendant of a talented Swiss confectioner family. Gerbeaud expanded the cafe and developed it into one of Europe’s finest coffee houses and pastry shops. He added new cakes to the menu and introduced modern confectionery techniques. Gerbeaud even founded a small chocolate factory where the legendary pralines and other sweets were made. 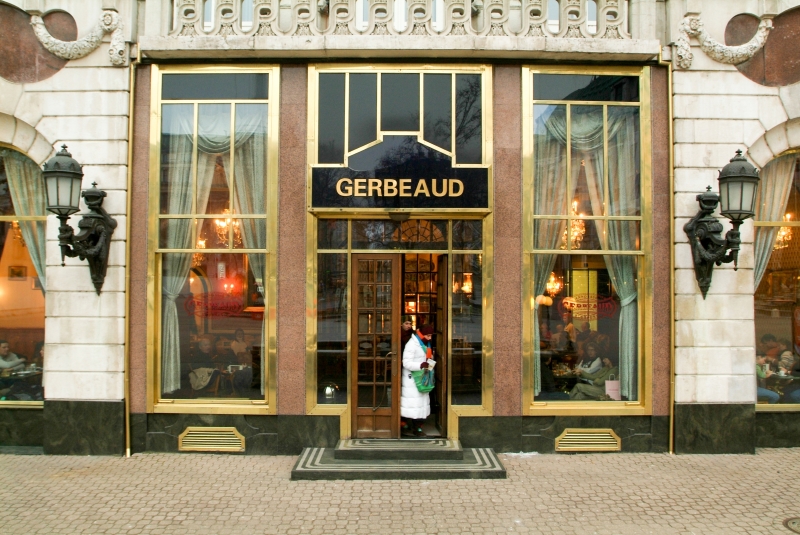 The confectionery is located in an elegant building at Vörösmarty Square. The interior is grand, it’s a high-ceilinged room with magnificent crystal chandeliers, lavish brocade wall covers, and marble tables. In the 19th century, it was extremely popular. Everyone who counted at that time visited the place, including the Habsburg royal family and many foreigners. Sissy, the wife of Emperor Franz Joseph always dropped in the Gerbeaud when she was in Budapest. 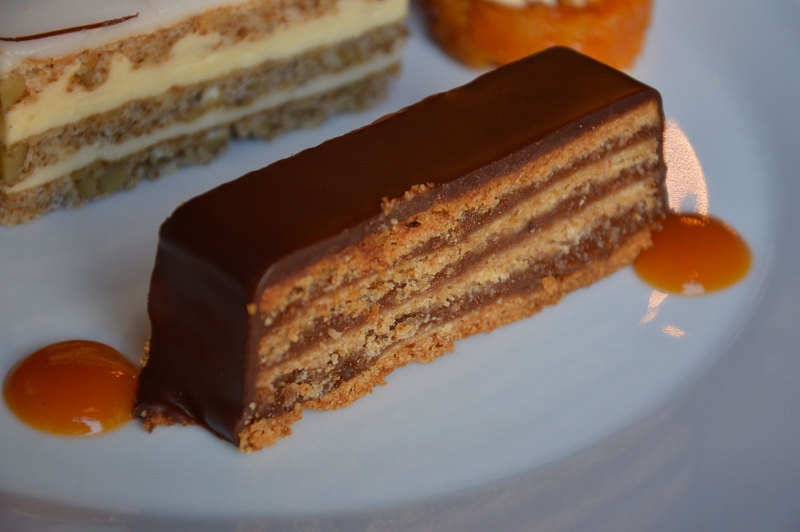 Gerbeaud’s specialities include Esterházy and Dobos cakes and the Gerbeaud slice named after Emil Gerbeaud. Mignon is also available. Few people know that “kugler” – well-known from the famous lines of young Attila József who would have been happy to be able to buy kuglers for five forints – and mignon are all the same. Kugler or mignon is a Hungarian pastry invented by Henrik Kugler.

Gerbeaud’s wide selection of handmade bonbons in decorative wooden boxes can be a wonderful present to anyone with a sweet tooth. 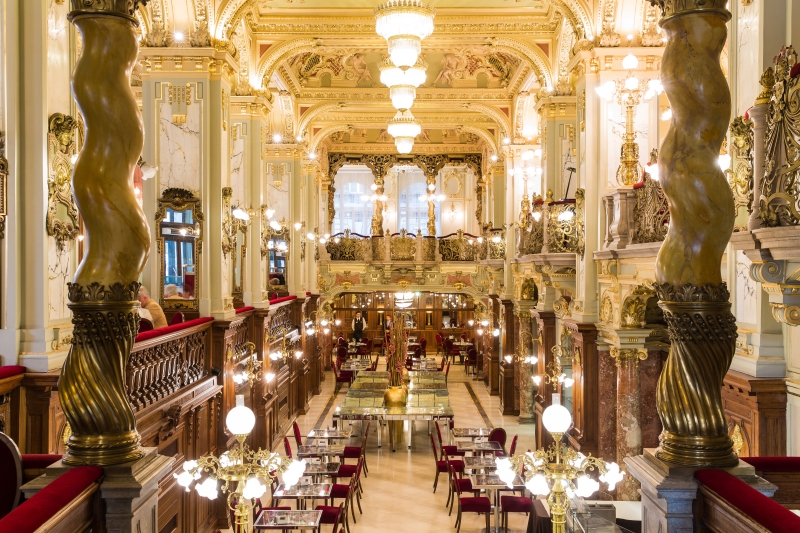 New York Café has been named ‘The Most Beautiful Coffee House in the World’. In the past it was a popular place among writers and editors, in fact, the most influential newspapers were edited here, upstairs in the gallery. After World War II, the café fell into disrepair and it served as a sporting goods shop. Although the café reopened in 1954, under the name of Hungária, it wasn’t until 2006 that the New York Café was restored to its original splendour. And it is splendorous indeed. It has preserved the original decorations that earned its fame throughout the world. The ceiling hosts the frescoes of Gusztav Mannheimer and Ferenc Eisenhut, dating back to the mid-1800s. Precious Venetian lamp shades diffuse a soft light that reflects off the gold-plated stuccoes of the tortile columns, creating a myriad of colours. Outside, the bronze Lucifers recall the many painters, actors and intellectuals that have frequented the place. The statues and other ornaments on the facade of the building, as well as the café’s 16 imposing devilish fauns, are the works of Károly Senyei.

Their confectionery sells the famous Hungarian pastries such as Dobos, Sacher and Eszterházy cake. 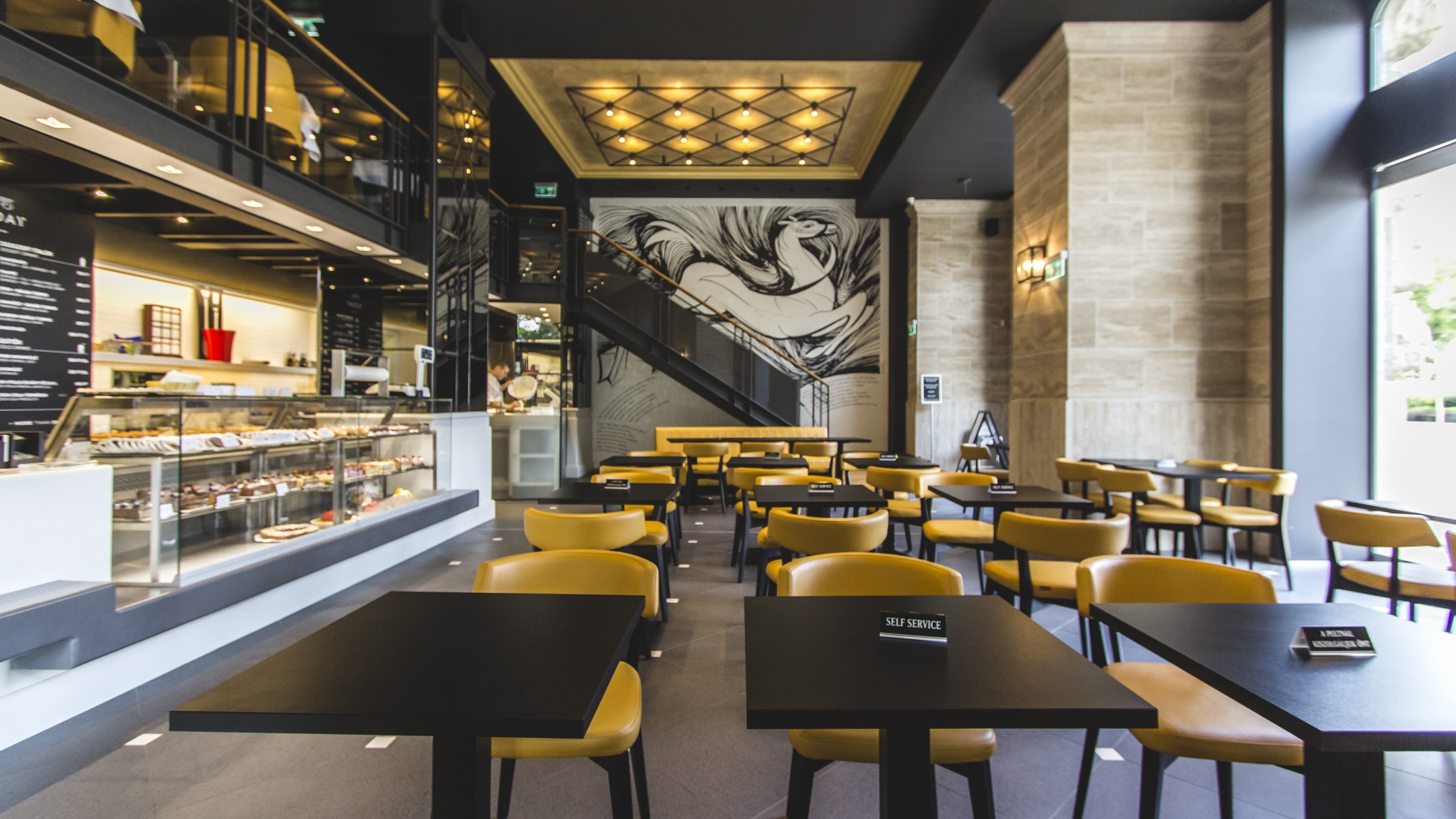 Szamos Marzipan opened a café and confectionery by the Hungarian Parliament on Kossuth Square in 2016. It has a stylish and contemporary interior and offers healthy alternatives alongside the traditional menu that has been developed over their history. In addition to the classical choice, the sweet-shop also offers sweets and plated desserts that are French-like or typical of the Austrian-Hungarian Monarchy. Szamos Marzipan Company and Chocolatier was founded in 1935, and today the company has several confectioneries and shops, with a wide range of products.

On the first floor of the café there is their Chocolate Museum. The six-room museum showcases Szamos’s unique collection of more than 1,500 pieces of chocolate craftsmanship, which had been collected by the family for decades, plus educates visitors on the chocolate manufacturing process. The collection includes a chocolate tree and a life-size 80-kilogram marzipan sculpture replica of one of the most prominent paintings of Swiss artist Jean-Étienne Liotard, “The Chocolate Girl”. 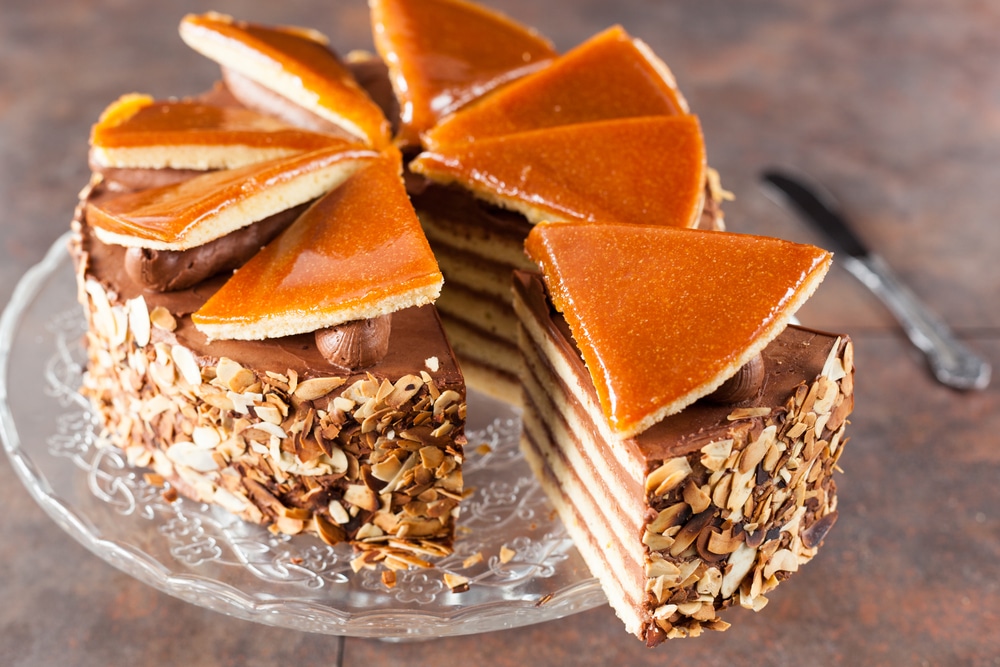