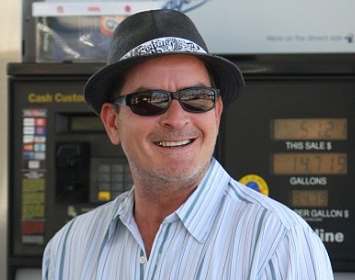 Charlie Sheen isn’t letting an impending jail term get him down. The Two And A Half Men actor, who is expected to be jailed for 30 days for an assault on his wife, looked in good spirits in LA yesterday. Wearing a trilby had and sunglasses, he smiled and joked with photographers as he filled his car with gas in Hollywood.

Sheen is due in court on June 7 to accept the deal which stems from his arrest on Christmas Day in Aspen, Colorado. Hollywood’s highest paid TV actor faced a series of serious charges after his wife Brooke Mueller claimed he had held a knife to her throat and threatened to kill her. Mueller, who tried to withdraw the charges, was later treated at a rehab clinic for substance abuse.

The 44-year-old will be eligible for work release as part of his plea deal, according to U.S. reports. The deal that will see Sheen jailed for a month will reportedly allow him to spend his days unpaid at Theatre Aspen, a renowned professional theater, where he will coach actors, help in the fundraising department and perform various other tasks. And although Sheen will still be considered an inmate at the jail as he serves the 30-day sentence for 3rd degree misdemeanor assault, is expected to be free to leave jail at 8am for work every day and must return by 8pm. He may also only end up serving 17 of the 30 days for good behaviour.