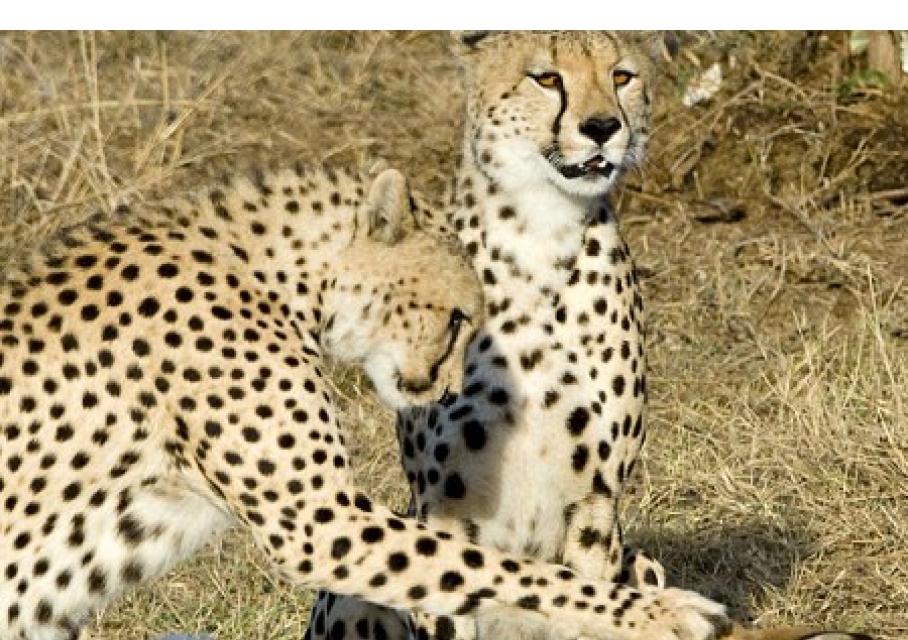 Coming from three deadly cheetahs, it's the kind of invitation that's best refused - but amazingly, this impala escaped unscathed from its encounter. Luckily for the youngster, it seems these three male cheetahs simply weren't hungry. That's because unlike other big cats, the cheetah hunts in the daytime, either in the early morning or late afternoon. The bursts of speed needed to catch their prey tire them out - meaning they need to rest after a kill.

And that seems to be the secret to the antelope's survival, as it's likely it fell into the cheetahs' clutches when they were already full - and tired out - from an earlier hunt.

Photographer Michel Denis-Huot, who captured these amazing pictures on safari in Kenya's Masai Mara in October last year, said he was astounded by what he saw. "These three brothers have been living together since they left their mother at about 18 months old," he said. "On the morning we saw them, they seemed not to be hungry, walking quickly but stopping sometimes to play together. At one point, they met a group of impala who ran away. But one youngster was not quick enough and the brothers caught it easily."

These extraordinary scenes followed, as the cheetahs played with the young impala the way a domestic cat might play with a ball of string.

"They knocked it down, but then they lost interest," said Michel. "For more than 15 minutes, they remained with the young antelope without doing anything other than licking it or putting their paws on the impala's head." Even more extraordinarily, this story has a happy ending - after one tense moment when it looked as though one cheetah would bite the impala on the neck, the youngster ran away.

Let's hope it didn't tell all its friends how nice those big, scarylooking cheetahs really are when you get to know them.

Impala
Impalas are medium-sized antelopes that roam the savanna and light woodlands of eastern and southern Africa. In the rainy season, when food is plentiful, they may gather in large herds of several hundred animals to browse on grasses and herbs, bushes, shrubs, and shoots.

Herds offer protection from predators, such as lions. An alert impala will bark out an alarm that puts the entire herd to flight—and a fleeing impala is no easy prey. This graceful antelope is known for its long, spiral horns, which males use to challenge each other in tests of strength.

Females typically give birth about seven months after they mate, usually to a single impala. Both mother and baby join a herd of females and offspring within a few days.
Nehézségi szint:
középfok
Címkék:
Tetszett a lecke? Oszd meg barátaiddal is!
Kapcsolódó anyagok
Iratkozz fel ingyenes napi leckéinkre!