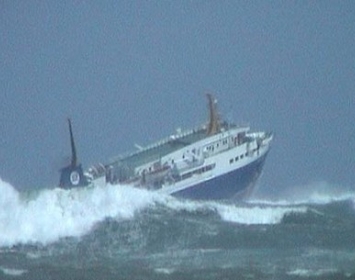 These amazing images show the internal CCTV footage of a high seas storm scene that could be straight out of a Hollywood disaster movie. The P&O cruise ship, Pacific Sun, ran in to trouble 400 miles off the coast of New Zealand. And as the ship struggles in the high seas, staff and guests are sent flying backwards and forwards, trying to grab on to anything nailed down – and failing.

The waves were so powerful that they lashed as high as the fifth deck. The receptionists are shown clinging on to their desks and computers before the more severe waves hit the liner. But soon they, and the guests, are sent careering across the floor like rag dolls, helpless and out-of-control.

Tables, chairs and passengers are hurled from side to side. Several people are injured by sliding tables and chairs, as well as by getting slammed into columns. P&O offered passengers a 25 per cent discount on their next cruise – but after this ordeal one would suppose that all of those involved would be happier on terra firma.