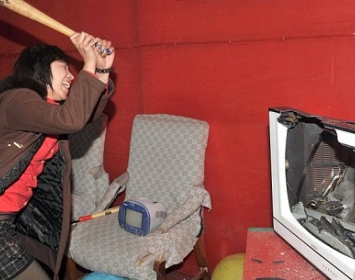 We have all wanted to break things out of sheer frustration – especially on a Monday. Now women in China have a special place they can go to do just that. A shopping mall in Shenyang has opened a special store for people to break all kinds of normal household things – smashing them to smithereens with baseball bats.

Even writing it feels a bit satisfying – proof that the store should succeed in its aim, which is to relieve pressure and lift bad moods. But beware, there are no men allowed – this is a women-only zone. The store seems to be targeting housewives in particular. The store is divided into several zones, such as a living room and a bedroom. Mall business manager Wang Jingyu told the People’s Daily that the aim is for “women to come here to feel like they are in their own homes but without any limitations. They can break anything here.”

He added that the store is planning a kitchen-like zone in the future (though presumably without any knives). According to Wang, all the facilities in the store are real. Mobile phones and television sets – both satisfying to smash – are bought second-hand. Customers can also tear paper, hurl plates, and beat big bean bags in the corner. They are provided with gloves and helmets to prevent any accidental injuries – and ‘venting’ time is limited to just one mad minute.

Since the store opened, most customers have been college students and white collar workers, it was claimed. The common source of their frustration? Rest easy, Chinese men everywhere, relationships – perhaps surprisingly – did not top the list. According to the People’s Daily, most were bashing over job hunting and the economy. Could such a concept be a ‘hit’ in Britain? There’s no evidence of such a store opening up at London’s Westfield shopping centre any time soon – but a girl can always dream.