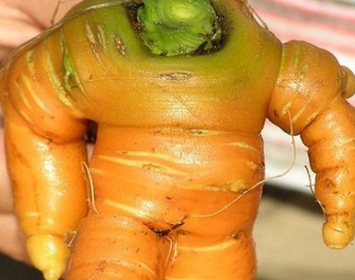 Until now, Clive Williams has struggled to get his grandchildren excited about vegetables. But after finding Buzz Lightyear in his back garden, he shouldn’t have that problem again. Clive, 68, made the remarkable find while rooting around his back garden for some food for dinner.

The retired electrical engineer immediately ran inside to show his three grandchildren the strangely shaped vegetable. Clive, from Henley-on-Thames, Oxon, said: "My wife Jane had asked for some carrots from the garden so I pulled a few out from the soil. When I saw this strange vegetable, the resemblance to Buzz Lightyear hit me straight away and I just thought ‘my gosh’. I’ve never seen any of the Toy Story films but it was uncanny, it dawned on me immediately. I ran inside and said to the grandchildren, ‘I’ve got a competition, who can guess which Disney character this is?’, immediately they all shouted "Buzz Lightyear!". I’ve grown carrots for about ten years and there is particularly stoney ground where we live, so the veggies sometimes tend to fork. However, we’ve never seen anything like this, I couldn’t get over how much it looked like Buzz."

Buzz Lightyear is a toy space ranger from the Toy Story films and voiced by Tim Allen. Clive’s grandson, Max Tait, eight, from Guildford, Surrey, said: "Granddad came in and asked us who the carrot looked like. We all shouted "Buzz Lightyear" straight away."