To some, Lance Armstrong is and always will be a true hero in the world of professional cycling. The recent allegations of drug-taking by him in his sport have caused widespread condemnation on him, and fellow team-mates caught up in the story that is emerging. These allegations say that Lance Armstrong was involved in one of the most sophisticated drug-taking conspiracy in sporting events history. Here we look at Lance Armstrong’s cycling career, his battle with cancer and the latest drug-taking revelations taking his sport by storm.

So who is Lance Armstrong?

Well, he was born in September 1971 and his birth name was actually Lance Edward Gunderson. He is a Texan born, in the city of Dallas, in the United States of America. Rather than start his career in sports professionally as a cyclist, he began competing in the pool as a swimmer, at the age of 12. It wasn’t long before he started to become interested in other sports, and decided to try at the triathlon, a combination of swimming, riding and running. At just 16 years of age he turned professional to compete in triathlon and became very successful, winning many championships. But it was to be cycling that he began to excel in as a sportsman. At just 21 years old, he amazed everyone in the cycling world by winning the road World Championship held in Norway. He went on to win more and more competitions in cycling and became successful across Europe, competing in the Tour De France and many other high-profile races, which also included taking part in the 1996 Olympic Games where he finished 12th in the road race.

That same year, in October 1996 Lance Armstrong was diagnosed with testicular cancer. His cancer was advanced or stage three, and by this time had spread to his lungs, stomach and also his brain. It was an immediate operation and chemotherapy that saved his life. Doctors told Lance that he only had a 40% chance of survival, but he did pull through and despite the removal of one of his testicles to save his life, and operations to remove tumours on his brain, he began to make a full recovery from his illness.

His comeback into the sport of road cycling 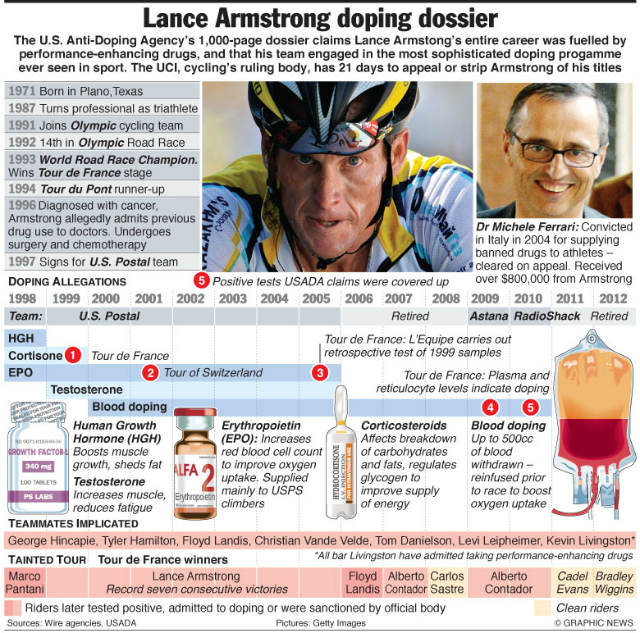 His road-racing comeback to former cycling strength began in 1998, when he finished fourth in a Spanish race and then just a year later in 1999, he won the Tour De France, which is the most challenging road cycle race in the world. The race is completed in stages, with the winner declared having won the most stages and fastest times overall at the end. The winner is awarded the ‘Yellow Jersey’, a traditional colour and title for Tour De France winners. Lance Armstrong went on to win 7 times, between 1999 and 2005 as well as other sporting titles. It was folowing his 7th Tour De France win that he officially announced his retirement from professional cycling. Then, after a short break from the sport, he decided to make a comeback into the sport and in 2008 he announced his return and intentions to take part in the 2009 and 2010 Tour De France races. He, however, couldn’t produce the same results and after the 2010 race declared that it would be his last.

Despite his battle with cancer and the removal of one of his testicles to save his life he has managed to father 5 children with his former wife and current partner, and has also dated singer-song writer Sheryl Crow.

During his time as a professional cyclist Lance Armstrong has used his money and his celebrity to raise money for his foundation, a trust set up to help people fight cancer.  Over $300 million USD has been raised through the sale of the Lance Armstrong Yellow Bracelets and other fund-raising activity. He continues to take part in the Ironman challenge at which he continues to win race after race. Lance Armstrong is now in the spotlight for a completely different reason today. He is caught up in a drug-taking scandal  that has shocked everyone involved in the sport of cycling. People refuse to believe that someone like him could allow himself to become part of one of the most sophisticated drug-taking conspiracies to ever come to light.

In his interview with Oprah Winfrey, the shamed cyclist finally and for the first time admitted that he had won all seven of his Tour de France medals with the help of banned substances and added: “I deserve to be punished. I don’t deserve the death penalty.” He was attacked for not showing enough repentance after years of lies and lawsuits to cover up, though he did say: “The ultimate crime is, uh, is the betrayal of those people that supported me and believed in me. They got lied to.”

In the meantime he complained that he had lost £47million in sponsorship after his cheating was exposed. Sponsors including Nike and Anheuser Busch ditched him after the report by the United States Anti-Doping Agency, which also led to the cycling governing body UCI stripping him of his titles.He also told Oprah we was still hoping to compete in top-level sport. He took part in triathlons, mountain bike events and marathons before his sanction, and said a lifetime ban was not fair. For sure, lessons will be learnt from the scandal and it is hoped that future competitions will be more thorough in the checking of drug-taking both in this sport and others following the revelations. Cycling will of course bounce back and continue to be a great spectator sport and we now have a new champion of the Tour De France by the name of Bradley Wiggins who is not only a champion at the Tour De France but also at this year’s Olympic Games.