European investigators say they have uncovered a sophisticated organised crime syndicate thought to have fixed about 680 soccer matches, including World Cup qualifiers and Champions League games, between 2008 and 2011.

A joint investigation between Interpol and Europol, the European Union's police agency, has revealed evidence of fixing in about 380 matches across Europe and a further 300 games outside the continent. Europol director Rob Wainwright said the investigation had identified about 425 corrupt officials, players and serious criminals in 15 countries. Fifty people have been arrested so far.

"This is match-fixing activity on a scale we have not seen before involving hundreds of criminals and corrupted officials and players, affecting hundreds of professional matches and generating very large amounts of illicit profits," Mr Wainwright said.

Investigators say the scam was backed by a Singapore-based betting cartel and had brought in at least 8 million euros ($10.4 million) in proven profits after paying almost $2.5 million in bribes. German police described a global network involving couriers ferrying bribes around the world, paying off players and referees, with the biggest bribe being $180,000. Accomplices would then place bets on the internet or by phone with bookmakers in Asia, where bets that would be illegal in Europe were accepted.

"One fixed match might involve up to 50 suspects in 10 countries on separate continents," Friedhelm Althans, chief investigator for police in the German city of Bochum, said. "Even two World Championship qualification matches in Africa, and one in Central America, are under suspicion."

Other matches fixed included World and European Cup qualifying matches and top flight league matches in several European countries. They also included two Champions League matches, including one played in Britain. Investigators found that criminals from Asia also participated in the match-fixing and that some of the fixed matches took place outside Europe. Investigators said no names of players or clubs would be released while the investigation proceeded. 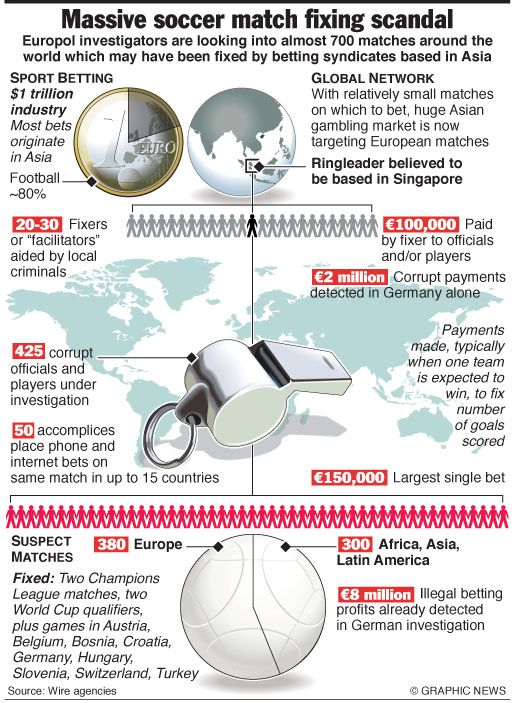