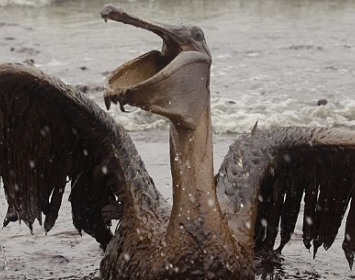 The bird struggles out of the sludge, fighting for air, oil dripping from its wings. It could be an image from a grisly sci-fi movie. But it is not. This bird is a shocking illustration of the catastrophic impact of the Gulf of Mexico oil spill on local wildlife. The pelican – the official bird of Louisiana – was one of a number that were saved off the coast of the state.

They were barely able to walk or get out of the sea near East Grand Terre island, where officials found around 35 of the birds. They were treated with detergents to wash off the oil. Many more animals have not been so lucky. More than 400 dead birds have so far been recovered. Images such as this will only fuel anger towards BP as the spill enters its 46th day and the company struggles to stem the flow of oil from the ruptured Deepwater Horizon well.

Crude oil has been pouring unchecked into the Gulf of Mexico at up to 19,000 barrels (800,000 gallons) a day since an explosion on April 20 that demolished a BP-contracted drilling platform off the coast of Louisiana, killing 11 crewmen. It unleashed an environmental disaster of epic proportions. The spill is now the worst in U.S. history – worse than the Exxon Valdez spill – and there is no end in sight.

The U.S. National Centre for Atmospheric Research projected that the oil slick would be driven by wind and currents around the Florida peninsula by early summer and up the East Coast, possibly as far as North Carolina. The Atlantic hurricane season began on June 1 and will last until October. The prospect of a massive storm spreading the oil, hampering efforts to cap the leak, is chilling. Back in the Gulf, wildlife officials said 60 birds at the Queen Bess Island Pelican Rookery in Louisiana, including 41 pelicans, were found coated in oil before being caught and taken to a rehabilitation centre. The brown pelican, Louisiana’s state bird, was removed from the federal endangered species list last year.

Nézd meg ezt is:  Dog rescued after being trapped on cliff for nine days

A bird that feeds by plunge-diving for fish in the open surf, the brown pelican has been among the hardest hit birds by the spill.

Angol Nyelvvizsga
Nézd meg ezt is:  The signs of the Zodiac