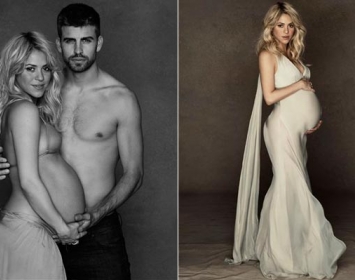 ‘Just like his father, baby Milan became a member of FC Barcelona at birth’: Shakira announces happiness after son is born 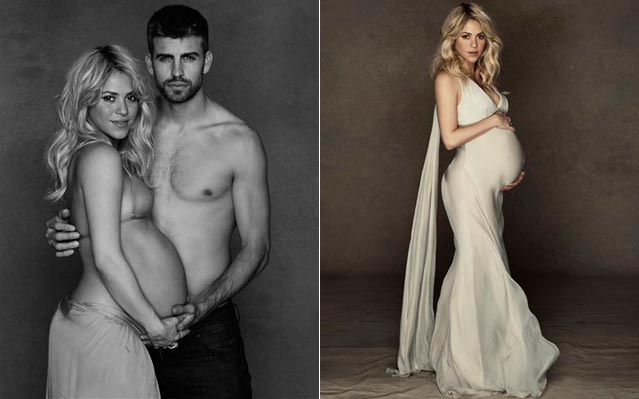 Shakira has become a mother for the first time after giving birth to her baby son, Milan. The singer has announced the happy news on her official website, revealing that he is already to follow in the footsteps of his father, footballer Gerard Pique, stating: ‘Just like his father, baby Milan became a member of FC Barcelona at birth.’ She added in the message: ‘We are happy to announce the birth of Milan Piqué Mebarak, son of Shakira Mebarak and Gerard Piqué, born January 22nd at 9:36pm, in Barcelona, Spain.
‘The name Milan (pronounced MEE-lahn), means dear, loving and gracious in Slavic; in Ancient Roman, eager and laborious; and in Sanskrit, unification…‘The hospital confirmed that the couple’s first child weighed approximately 6lbs. 6 ounces, and that both mother and child are in excellent health.’ The singer took to Twitter just four hours earlier to ask her devotees to pray for her during the birth of her first child, revealing to them that she was about to go into labour.The 35-year-old Colombian star was admitted into hospital in Barcelona, where she was due to be induced and give birth to her baby boy with her 25-year-old boyfriend Gerard.
A source previously told Spanish newspaper La Razon that the couple scheduled the birth so that FC Barcelona footballer Gerard could be present during their baby’s arrival. The insider also revealed that the singer had requested a female only medical team, who all signed confidentiality agreements, assist her during the birth. Shakira has been dating soccer player Gerard for around two years and previously said he is the "best thing" to ever happened to her, until she got pregnant.
Shakira only confirmed their relationship last year by posting a picture of them both together on Twitter and Facebook with a caption reading, ‘I present to you my sunshine’ in Spanish.
Last week the couple invited fans to join them at their virtual baby shower, where they can purchase essential baby gifts that will support UNICEF and benefit some of the world’s most vulnerable babies.The online baby shower engages social media fans by enabling them to join the popstar and her footballer beau in their virtual living room, where they can buy ‘Inspired Gifts’ such as mosquito nets, polio vaccines and baby-weighing scales that will be distributed to children and communities in some of the poorest corners of the globe. After purchasing an ‘Inspired Gift’, fans will then receive a personal thank you message from the couple, and be able to view exclusive photos of them taken in December 2012 by Jaume Laiguana.
to give birth – szülni
to announce – közölni/bejelenteni
official – hivatalos
to reveal – felfedni/elárulni
to follow in the footsteps of somebody – valakinek nyomdokába lépni
to state – állítani/kijelenteni
to become – válni (valamivé)
at birth – születéskor
gracious – kedves/kecses
eager – lelkes/buzgó
laborious – szorgalmas
unification – egy(ség)esítés
to confirm – alátámasztani/igazolni
approximately – körülbelül
devotee – híve valaminek/rajongó
to pray – imádkozni
to go into labour – vajúdni
to admit in/into – felvenni/bebocsátani valahova
due – esedékes
to induce – beindítani
to schedule – időzíteni
to be present – jelen lenni
arrival – érkezés
insider – bennfentes/beavatott
to request – kérni
confidentiality agreement – titoktartási szerződés (bizalmassági megállapodás)
to get pregnant – teherbe esni
caption – képaláírás/felirat
to present somebody – bemutatni
baby shower – babváró
to purchase  – venni/vásárolni
essential – fontos/alapvető
to support – támogatni
to benefit somebody – javára szolgálni valakinek
vulnerable – sebezhető/gyenge
to engage  – alkalmazni/foglalkoztatni
to enable  – lehetővé tenni
beau – szépfiú
mosquito net – szúnyogháló
scale – mérleg
to distribute – szét/kiosztani
to receive – kapni
to view – (meg)tekinteni/nézni
source: Daily Mail