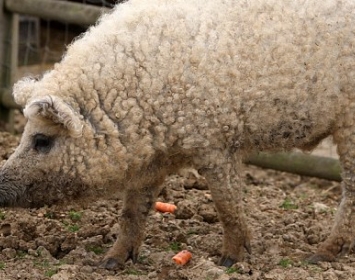 At first glance, with its woolly coat, onlookers would be forgiven for mistaking this creature for a sheep. However, a closer look at this rare breed reveals a snout and trotters usually found on pigs. It’s a confusing sight, but this is one of three curly coated Mangalitza ‘sheep-pigs’ which have been delivered to a UK zoo.

As part of a programme to help save the animals from extinction, staff at Tropical Wings in Essex are hoping they can help the breed survive. Originating from Austria and Hungary, the Mangalitza is similar to the native Lincolnshire curly coat breed which died out in Britain 40 years ago. “At first sight, people think they are sheep,” Denise Cox, education co-ordinator, at Tropical Wings, said.It is not until they turn around and you see their faces and snouts you realise they are in fact pigs. “The woolly coat makes them very hardy and helps them to survive in the harsh winters in their native Austria and Hungary. In the summer it helps protect them from sunburn.”

“It’s extremely rare, particularly in its native Hungary and Austria. We want to show people what these native woolly pigs used to look like and ensure the breed remains in this country and survives. They have already become a real talking point at the zoo and everyone loves them.” Mangalitza pigs are much hardier than normal pigs and moult in the summer to prevent them getting too hot. Unlike normal commercial pigs they do not get sunburnt.

Sheep-pigs hit the headlines last month after Emma Thompson took one to the London premiere of her latest film Nanny McPhee And The Big Bang.