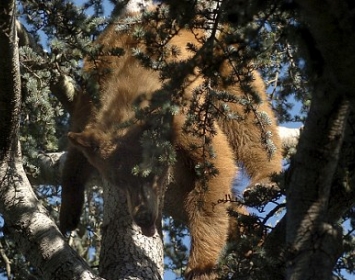 They’re more used to rescuing cats from high branches, so when it came to a 250lb (113 kg) black bear, this group of firemen certainly had their work cut out for them. The bizarre rescue took place after the animal climbed 30ft up a tree in Santa Clara Cemetery in Oxnard, California. Joined by officers from the state Fish and Game department, fire crews hoisted the bear back to earth after it was knocked out with tranquilisers.

The bear had been spotted roaming the streets earlier on, and had scampered up the tree where he remained for several hours as a plan was devised to get him down. Once the sedatives fired at him had taken effect, the crews worked together to fit the groggy animal with a harness, before using a ladder truck to lower him to the ground. He was then examined by a vet before being released into the Los Padres National Forest.