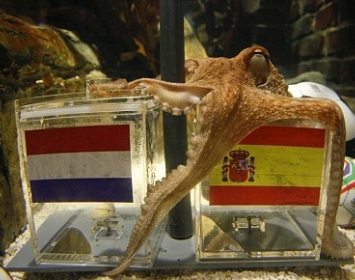 It’s the news we’ve all be waiting for and now Sportsmail can officially confirm who Paul the Psychic Octopus has backed to win this Sunday’s World Cup final. In a breath-taking event, broadcast live across German TV, sea world’s answer to Mystic Meg, has predicted Spain will triumph over Holland to lift the famous Jules Rimet trophy. The news will come as a huge boost to Vincent Del Bosque’s squad ahead of the crunch game, but will be a devastating blow for the Dutch’s preparations as both countries aim to win their first World Cup. Paul has been in stellar form during the tournament, correctly predicting all of Germany’s six results, including their shock defeat to Serbia – a probability that boffins reckon is less than 0.5 per cent.

Paul has also stuck his tentacles on the line by predicting that Germany will beat Uruguay in Saturday’s third place play-off. The oracle’s new found-fame has come at a cost however, after he received death threats from angry Argentina fans, claiming he was to blame for their exit. And he may be appearing on a sushi menu any time soon now that Joachim Low’s side have exited the tournament. It’s worth noting that Paul is in fact English. He was born in Weymouth to be precise and moved from the town’s Sea Life Park in 2006. But he never showed any of his potential. Fiona Smith from the Sea Life Park said: ‘He never made any predictions while he was living here but maybe he was waiting for a big event like the World Cup until he revealed his abilities.’