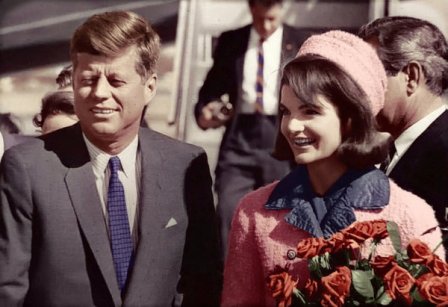 John Fitzgerald Kennedy was born on May 29, 1917 in Brookline, Massachusetts in a wealthy and powerful political family. He was second of nine brothers and sisters, educated at the best schools and graduated from Harvard in 1940 wealthy. Jack was a very intelligent and popular student. John’s father had the dream that one of his sons would become President and expected his oldest son, Joe Jr., to fulfil this dream one day.

Kennedy’s assassination cut short a brilliant career. During the 21 hours that the president’s body lay in state in the Capitol Rotunda, about 250,000 people filed by to pay their respects. The ceremony was partly modelled on the funeral of Abraham Lincoln at the request of Jackie Kennedy. JFK was laid to rest on November 25th in Arlington National Cemetery. More than 100 countries were represented and millions of people watched on television. Afterward, at the grave site, Mrs. Kennedy and her husband’s brothers, Robert and Edward, lit an eternal flame.