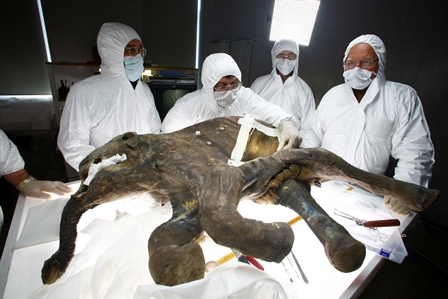 When Yuri Khudi, reindeer herder and hunter noticed the animal body parts sticking out from the snow, he thought he had found a dead reindeer. However, his discovery proved to be much more significant. The dead animal turned out to be the remains of a frozen baby mammoth, which the north-west Siberian ground had preserved for thousands of years. Scientists were called in and the female calf named Lyuba after the hunter’s wife was transported to the regional capital of Salekhard. Further examination showed that Lyuba weighs 50 kg, is 85 centimeters high and 130 centimeters from trunk to tail. She had been lying in the frozen ground for at least 10, 000 years after her death at about one month of age. The deputy director of the Russian Academy of Science’s Zoological Institute, Alexei Tikhonov told reporters that the mammoth’s remarkable condition may serve as a potential base for future genetic, molecular and microbiological studies.

The outer shaggy fur was missing, its nails and parts of an ear were gone, and the tail had been bit off, but the rest of its body was undamaged. The unique skin conditions protected the internal organs from modern microbes and micro-organisms. In fact, scientists have even been able to identify milk from her mother in her stomach.

Scientists say that it’s possible that Lyuba drowned in a mud-slide and the clay–like substance preserved her in such an extraordinary state. Lyuba’s unique skin conditions explain why many scientists believe that she is the world’s most valuable discovery. Scientists hope that they can clone the mammoth in the near future. This is because the woolly mammoth shares 99.4 % of its DNA with its closest living relative, the Asian elephant. What’s more, the mammoth genome was the first genome that scientists have reconstructed from an extinct animal.

Tikhonov personally does not think that the cloning will be successful because Lyuba’s body was protected by the freezing conditions, in which cells usually burst. However, cells need to be whole for cloning. Others are still optimistic and have not given up hope to bring the mammoths back from the dead. One way would be to create a hybrid by injecting mammoth sperm into the egg of a relative, the Asian elephant. Another way would be to fuse the nucleus of a mammoth cell with an elephant egg cell without its DNA.

Lyuba’s adventurous modern-age life has just begun. One of the first stops on her journey around the world was St Petersburg. There she was displayed with Dima, a male baby mammoth discovered in Russia’s far-eastern Magadan in 1977. Various exhibitions and researches will follow until she is finally taken back to her home museum in Salekhard. Lyuba’s discovery is not only important because it might bring the mammoths back to life, but also because she may be the key to solving many questions about this extinct animal and what caused its disappearance from earth.