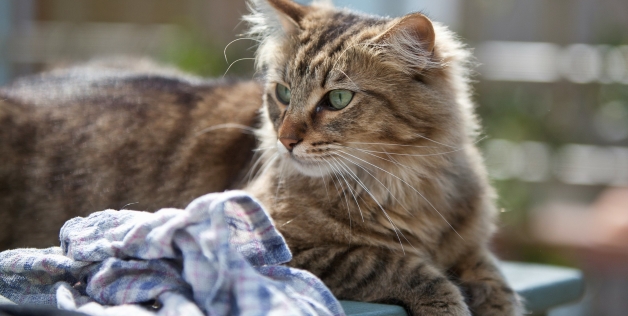 This cat is feline guilty these days. Norris, a longhaired resident of Bristol, Eng., has such rampant kleptomania that his owners have had to write an apology note to their neighbors.

"At first we thought it was funny," Richard Windsor said, according to the Daily Mail. "But as his stash grew and the items were getting bigger, we thought we needed to return them."

The couple suspects their pet snatches items from clotheslines and may even enter neighbors’ homes through cat doors. They recently sent letters around the neighborhood, asking neighbors who may have lost items to get in touch.

"So far we have been able to reunite a number of items — including a towel set, some oven gloves, a bath mat, some baby clothes and some running gear — with their owners," Richard said.

Talking to BBC Radio 5, the 26-year-old speculated that Norris’ criminal exploits may be spurrrrred by to the lack of wildlife in the neighborhood, and that with no slain mice or birds to leave on the doorstep, Norris goes "out in search of something else to bring back for me."