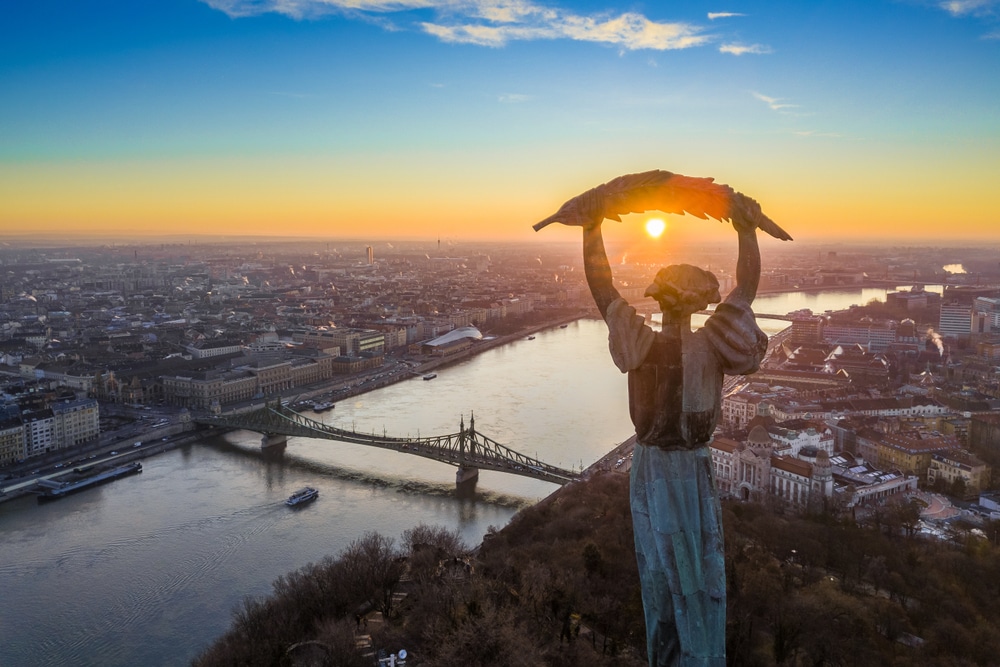 Budapest’s Castle Hill, along with the two banks of the Danube downtown, are world-famous and rightly recognized as a UNESCO World Heritage site. One of the best spots to see most of this beauty is Gellért Hill, just by the river on the Buda side. A popular hiking spot, backdrop to several baths, and the foundation of the sky-high Statue of Liberty, Gellért Hill plays an important part in Budapest’s life. But what’s on the inside?

Perhaps the oldest sight inside the hill is the Cave of St. Ivan. It was already a shelter thousands of years ago, and it has a strategically important location, close to a good spot to cross the Danube. In fact, Pest might be named after the cave itself. A Slavic word for “oven”, potentially referring to the cave and the warm water inside, Pest was the original name of the hill, and potentially the reason for naming the opposite town itself after it. Inside, there is a constant 21-degree temperature due to the thick rock walls and the nearby warm-water spring. According to legend, the cave was home to St. Ivan, a monk who healed the people living nearby using the spring waters of the hill.

The cave, of course, is also home to the Cave Church, a chapel of the Pauline order, built in 1926 following the plans of Kálmán Lux, who was inspired by the Lourdes cave in France. A few explosions helped to expand the natural opening, giving it the shape it has today. A Neo-Roman cloister was also added to the church itself in 1934, with the cross on top of the hill set up in 1936. After World War II, the cave was closed off with concrete walls, the cross toppled, and the monks taken away. It was finally restored in 1992, with the cross standing again in 2001. It’s a special location, not least due to the “Cauliflower Room” (Karfiol-terem) just underneath, which is home to a host of dripstones. 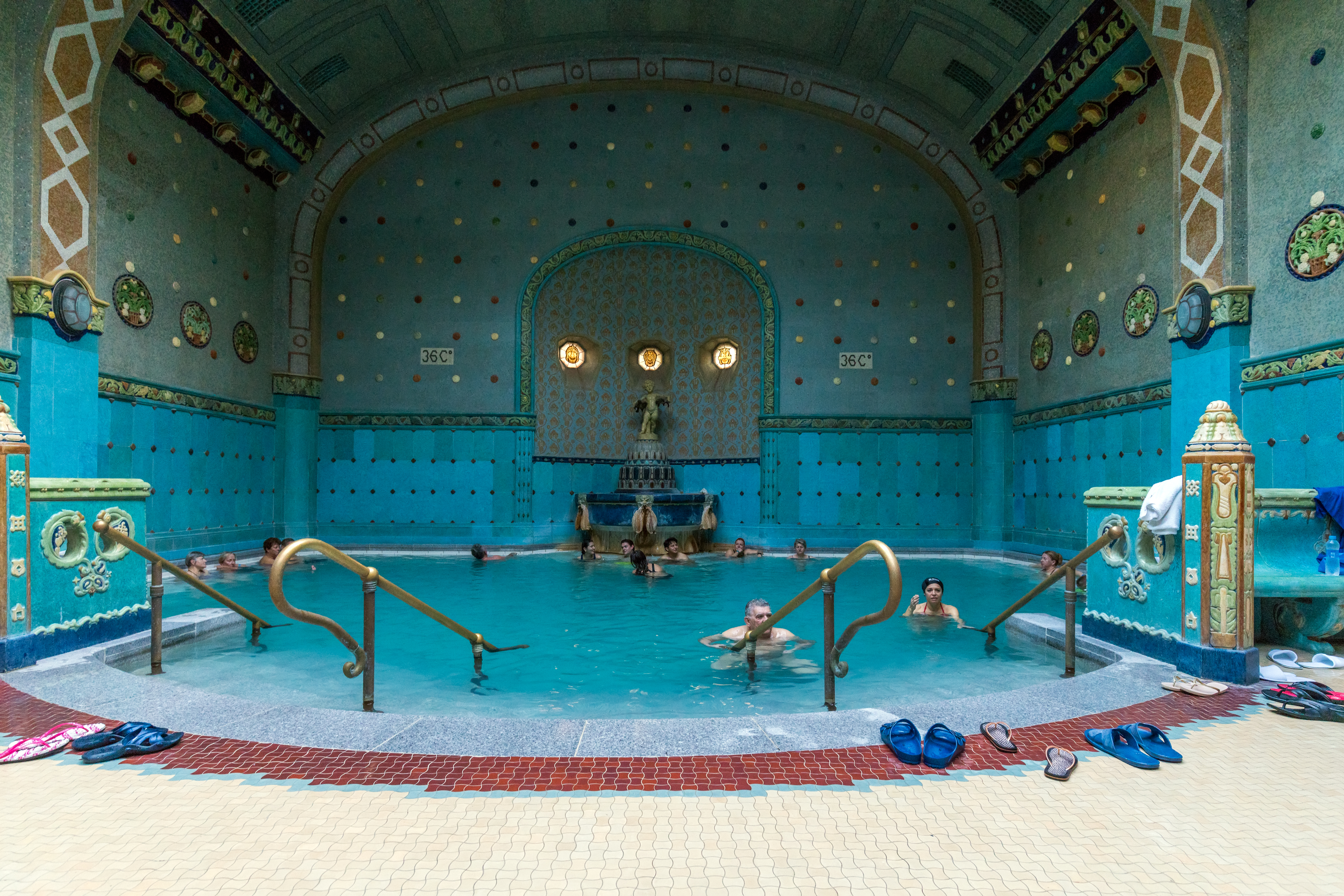 The grandiose hotel building on Szent Gellért Square is familiar to most of us, but the world below it is far less known. It is 15 metres below the ground that we can find the original hot springs supplying water to the bath, in a big, echoey cave with thick steam all around. The 43-degree water bubbling up is not drinkable anymore, because when the Danube is high, its water mixes with the fresh water from the springs. About a century ago, it was much more of a drinking spot! All the more so because all of it was above ground. The square only got covered up when the embankments by the Danube were built. Today, there are giant pumps getting 50-60 cubic metres of water into the bath every hour, and these same wells supply the water to Rudas Bath and Rác Bath (the latter of which, interestingly, used to be the poor man’s counterpart of Gellért: it was free if you brought your towel).

Hospital in the Rock (Sziklakórház) 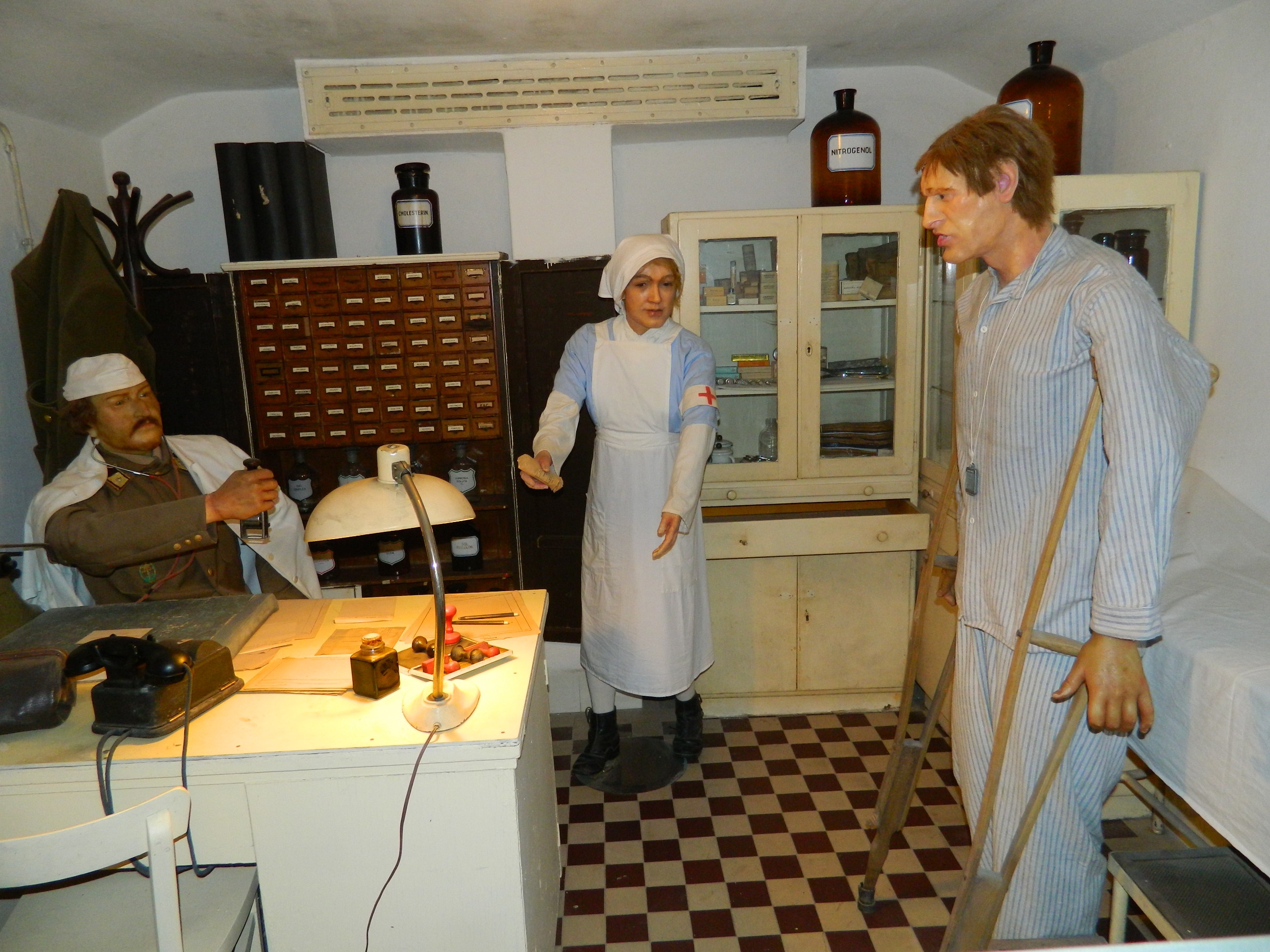 Over on the eastern side of the hill, there is an entrance to part of the huge network of caves, tunnels, and cellars that locals have been building and expanding since the Middle Ages. During World War II, one section of this network was fortified and transformed into a shelter, then a hospital opened inside in 1944, led by head nurse countess Ilona Andrássy. It was fairly advanced for its age, with three wards, an operating theatre, its own generator, and 94 beds for patients. The hospital only started seeing real use after the American air raids in May 1944, when it started treating those wounded in the attacks. In the busiest days of the war, it was absolutely packed, with 200-230 people lying in hallways and on floors, in constant 33-35 degree heat, with a severe shortage of supplies. Nevertheless, thousands of lives were saved in the tunnels during these months. The hospital was closed in June 1945, operated briefly as a vaccine factory, then became a hospital again in 1956. Afterwards, it remained a secret air raid hospital until 2002. Today, it operates as a museum, commemorating its times as a hospital and nuclear bunker

Every big city needs a stable water supply, and the József Gruber Water Reservoir is probably the most important piece in providing this for the city of Budapest. Holding up to 80,000 cubic metres of water, the reservoir’s 106 columns are quite a sight reflecting in the water below. It is usually filled up during the night, to provide for the high daytime water needs of the city. Not far from it above the surface is the Garden of Philosophers; but perhaps more excitingly, behind it, we can find the Kelenhegyi Pool, a giant reservoir built in 1902. The pool is out of use today after suffering a bomb hit during World War II, even though it still functioned for a while until the 1970s. It is mainly used for film shootings, if anything, these days. The pools are connected to the Budapest Water Works’ 1.5 km tunnel running along Gellért Hill north to south, but their exact entry point is kept as a serious secret for security reasons. 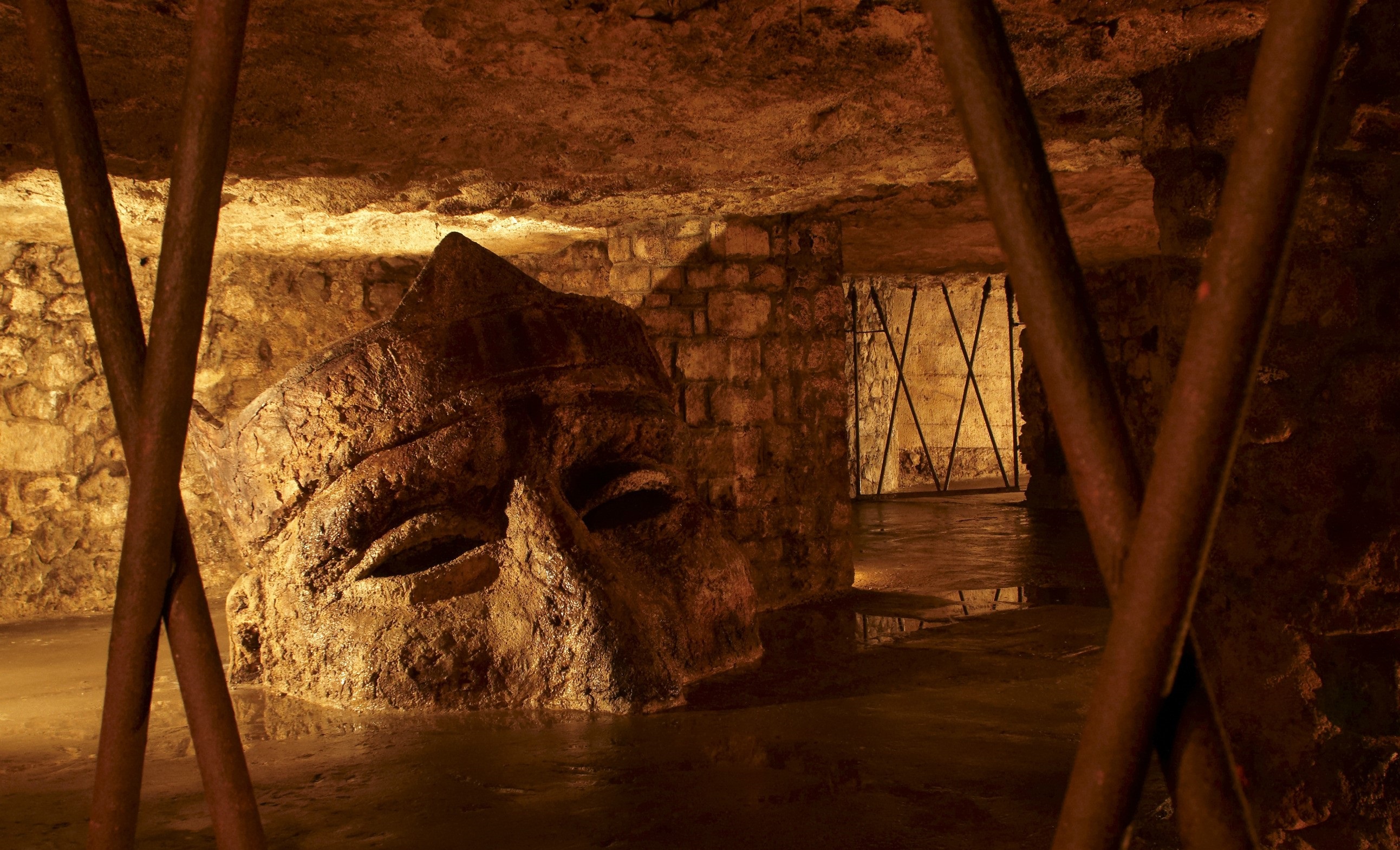 Connecting all of these special places is a long network of tunnels also known as the labyrinth underneath Buda Castle. It was originally a natural creation, carved out by hot water from the limestone and marlstone of the hill. Later, people started to connect private cellars, wells, and tunnels to it, creating a complex world 12 metres under the surface of the hill, reaching 3.3 km in length. Many of the tunnels have been forgotten or were damaged during the war, so there are several sections that the public is completely unaware of, only occasionally bumping into them during construction work. Some sections, however, are better known. The 2 km tunnel connecting Gellért Bath and Rác Bath, passing along Rudas Bath was built to find new streams, and today it transports heat to the castle. Inside, it is a constant 43-45 degrees with 100% humidity. Some plans intended to use it as a nuclear bunker, others wanted to open windows in it overlooking the river and planting warm-weather plants along the way, still others were considering building a spa train to carry passengers between the baths. While none of these plans became reality, who knows if it’s going to be used for something else in the future? 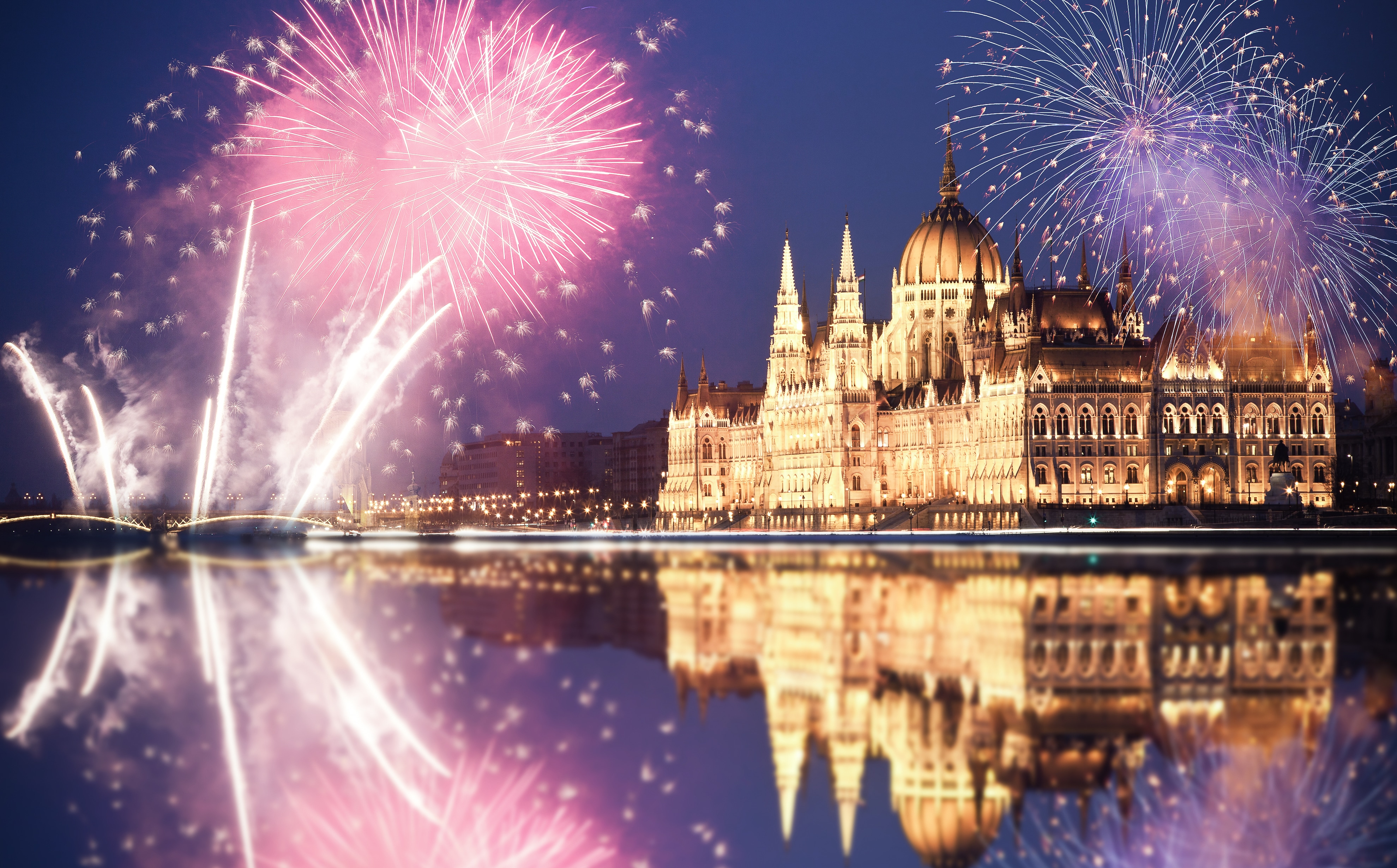 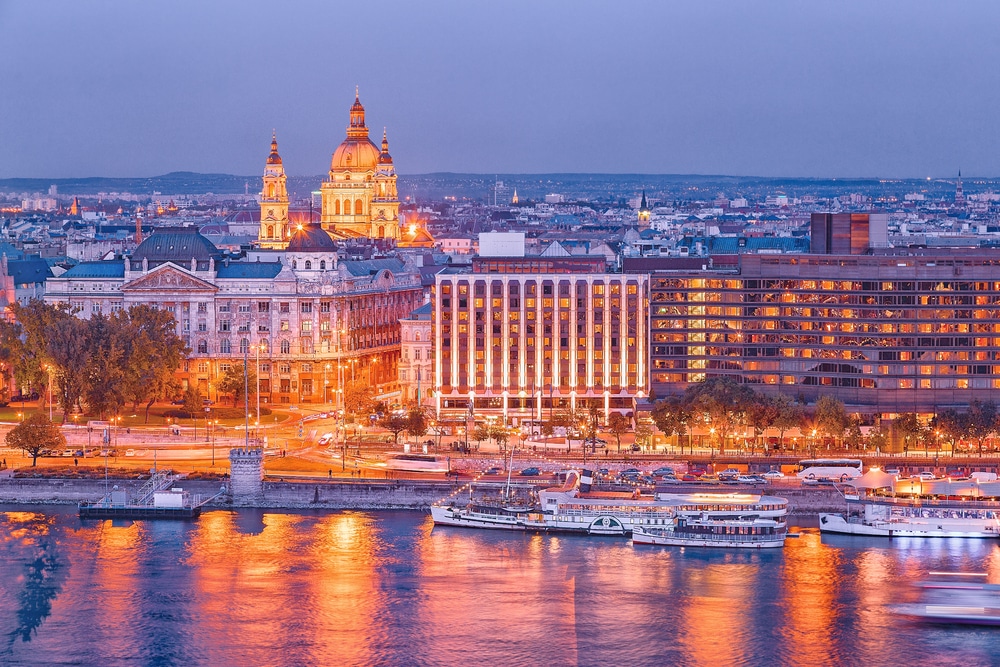