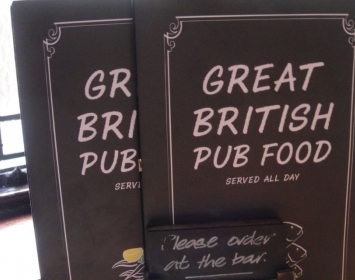 Traditionally pubs in England were drinking establishments and little emphasis was placed on the serving of food, other than bar snacks, such as pork scratchings,  and pickled eggs, along with salted crisps and peanuts which helped to increase beer sales.

In the 1950s some British pubs would offer "a pie and a pint", with hot individual steak and ale pies made easily on the premises by the landlord’s wife. In the 1960s and 1970s this developed into the then-fashionable "chicken in a basket", a portion of roast chicken with chips, served on a napkin, in a basket. “Pub grub” expanded to include British food items such as steak and ale pie, shepherd’s pie, fish and chips, bangers and mash, Sunday roast, ploughman’s lunch, and pasties. In addition, dishes such as burgers, lasagne and chilli con carne are often served. Since the 1990s food has become more important as part of a pub’s trade, and today most pubs serve lunches and dinners at the table in addition to snacks consumed at the bar. They may have a separate dining room.

So typically British meals … but how are they made? 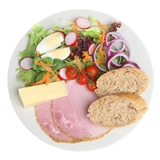 Ploughman’s lunch: It is a cold snack or meal, originating in the United Kingdom. It is served in pubs, and sometimes eaten in a sandwich form.  It consists of cheese (usually a thick piece of Cheddar, Stilton or other local cheese); often cooked ham slices, pickles, apples, pickled onions, salad leaves, and crusty bread and butter. 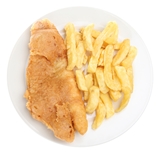 Fish and Chips: Fish and chips consists of battered fish which is deep-fried and served with chips. UK chippies traditionally use a simple water and flour batter, adding a little baking soda and a little vinegar to create lightness, as they create bubbles in the batter. Other recipes may use beer or milk batter, where these liquids are often substitutes for water. In Britain and Ireland, cod and haddock appear most commonly as the fish used for fish and chips. 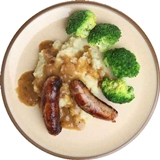 Bangers and mash: Bangers and mash, also known as sausages and mash, is a traditional English dish made of mashed potatoes and sausages. The dish is sometimes served with a rich onion gravy. It can also often be found served with fried onions. This dish may, even when cooked at home, be thought of as an example of pub grub and has particular iconic significance as traditional British working-class dishes. 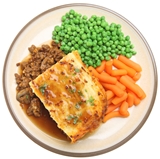 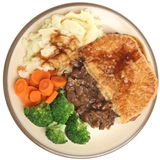 Steak pie: A steak pie is a traditional meat pie served in Britain. It is made from stewing steak and beef gravy, enclosed in a pastry shell. Sometimes mixed vegetables are included in the filling.

Angol Nyelvvizsga
Nézd meg ezt is:  6 Reasons the Past Was a Really Smelly Place