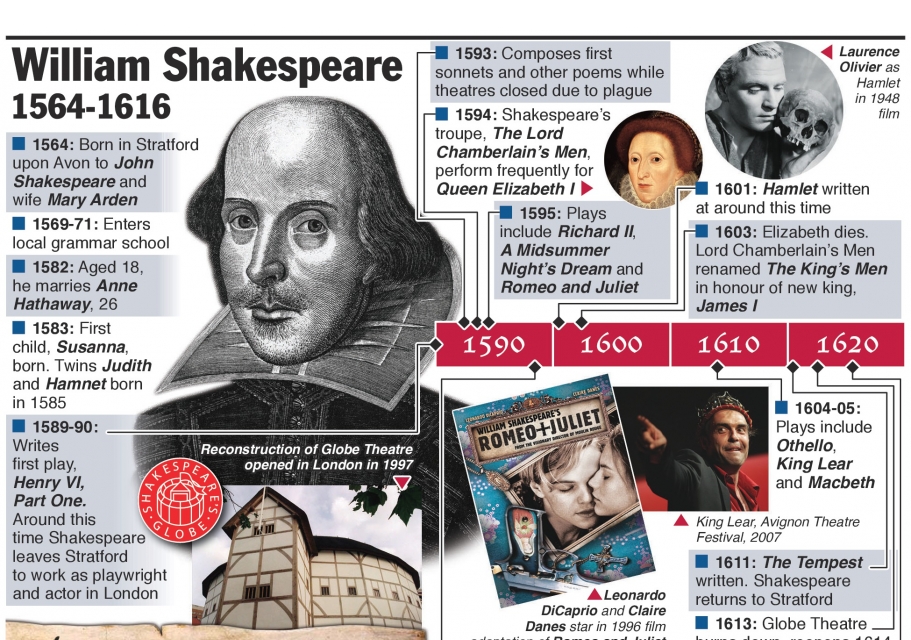 William Shakespeare, the most influential writer of all time 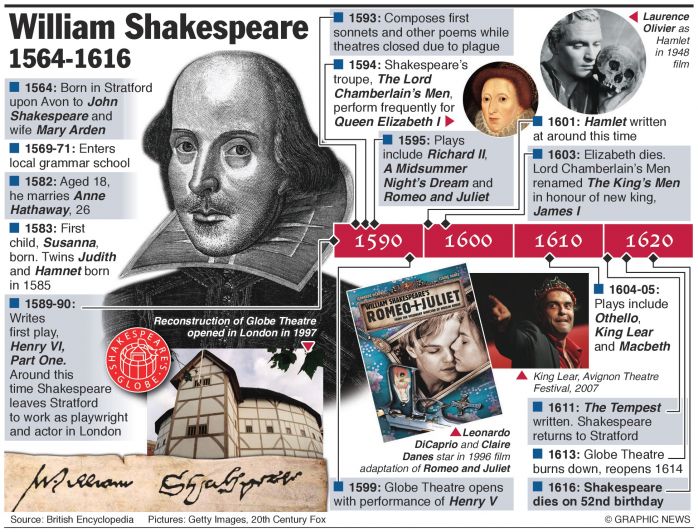 William Shakespeare was born in Stratford-upon-Avon on April 23, 1564. Son of a glover and leather merchant, he very likely attended the local grammar school but there is no proof whatsoever of him going to university, despite the brilliance of his plays and sonnets. The next documented event in Shakespeare's life is his 1582 marriage to Anne Hathaway, who was 8 years older and pregnant at the time. The couple had a daughter the following year and twins in 1583, but their only son, Hamnet died at the age of 11.

There is no information of Shakespeare’s whereabouts for the seven years before documents show him making a name for himself in London as an actor and playwright in 1592. Two years later he was a business partner in the group called Lord Chamberlain's Men to become the King's Men after James I came to the throne in 1603. His company was the most successful one in London and his plays were so much admired that he published them and the audience bought the “penny-copies” as popular literature. No playwright had been able to do this during his lifetime before. This was a period when owning books was a luxury for most people.

In 1599 the troupe built the Globe, an open-air theatre on the Southern bank of the Thames and in 1608 they also acquired an indoor theatre, where they played for a refined audience. In Elizabethan times all sorts of people went to the theatre to see the all-male cast perform comedies and bloody tragedies. It was a type of entertainment similar to the cinema in the first half of the 20th century. Business was good and Shakespeare became a wealthy man. He retired around 1613 and died in Stratford, aged 52, on his birthday. Thirty-six of his plays were published by his fellow actors in 1623 in a book that became the main source of the Shakespeare revival of the 19th century.

SAM: It is not my fault, Master Shakespeare. I could do it yesterday.

SAM:  ”Parting is such sweet sorrow…"

HENSLOWE: The show must … you know

HENSLOWE: Juliet does not come on for twenty pages. It will be all right.

WILL: How will it?

HENSLOWE: I don't know. It's a mystery.

HENSLOWE: Can we talk? We have no Juliet!

HENSLOWE: It will be all right, madam.

VIOLA: What happened to Sam?

HENSLOWE: Who are you?

HENSLOWE: Do you know it?

PHILIP AS LADY CAPULET: "Nurse, where is my daughter? Call her forth to me."

RALPH AS NURSE: "Now by my maidenhead at twelve year old, I bade her come. What, lamb. What ladybird."

RALPH AS NURSE: "God forbid. Where's this girl? What, Juliet!"

VIOLA AS JULIET: "How now, who calls?"

BURBAGE: We’ll all be put in the Clink!

HENSLOW: See you in jail.

RALPH AS NURSE: "Your mother."

VIOLA AS JULIET: "Madam. I am here, what is your will?

PHILIP AS LADY CAPULET: “This is the matter. Nurse, give leave a while. We must talk in secret. Nurse, come back again. I have remembered me; thou’s hear our counsel. Thou knowest my daughter’s of a pretty age.