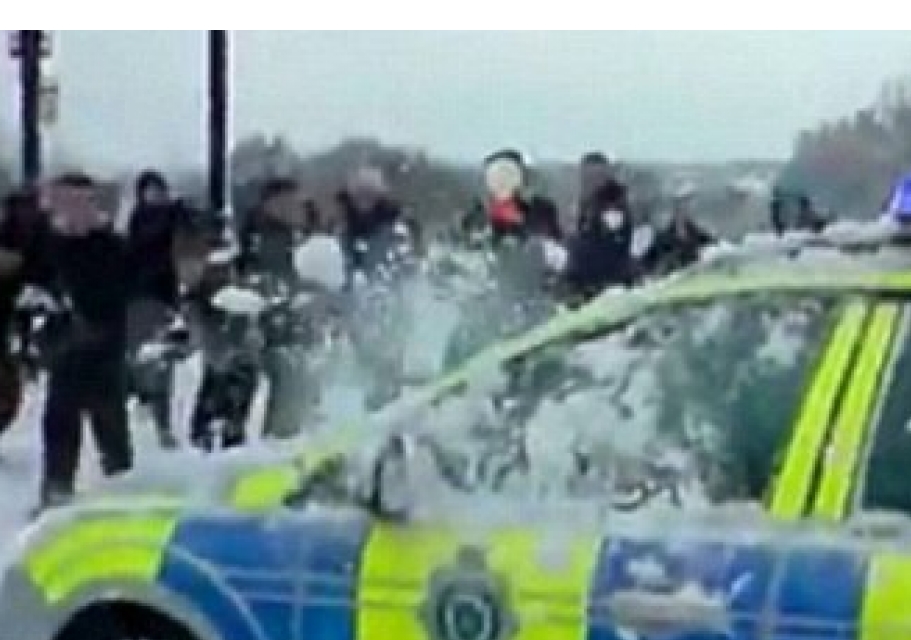 Two police officers were forced to flee to the safety of their patrol car when more than 100 teenagers launched a mass snowball attack.They sat in their car as it was pelted by scores of jeering youths, caught on camera by one using his mobile phone. After a sustained bombardment lasting two minutes which left the car with a thick covering of snow, the officers managed to clear the windscreen with the wipers and make a snail-paced retreat.

However, the crowd did not give up easily, and continued their attack as the wheels on the car spun on the ice at the park in Crawley, West Sussex.

At one point in the video, posted on YouTube, a woman can be heard saying,  "Actually boys, I think you'd better stop." As they return to the park, one boy is heard on the video saying: "That was the best bit of the day." A spokesman for Sussex Police said: "On the face of it this just looks like harmless fun."

The reaction of the police was a far cry from the actions of a policeman in Washington DC this week, who pulled a gun on revellers who pelted his car with snowballs and has since been transferred to desk duty.

Official rules of a snowball fight:

a, There is crude formation of "teams", usually two groups of opponents throwing at each other.
b, Those in a fight often do not behave malevolently; a target is usually not viciously assaulted by snowballs.
c, There is minimal physical contact, aside from perhaps wrestling.
d, In contrast to other forms of fighting, there is usually no intention of bodily harm.
e, Construction and use of snow forts is permitted.