What is the world's most dangerous job?
Főoldal

What is the world's most dangerous job? 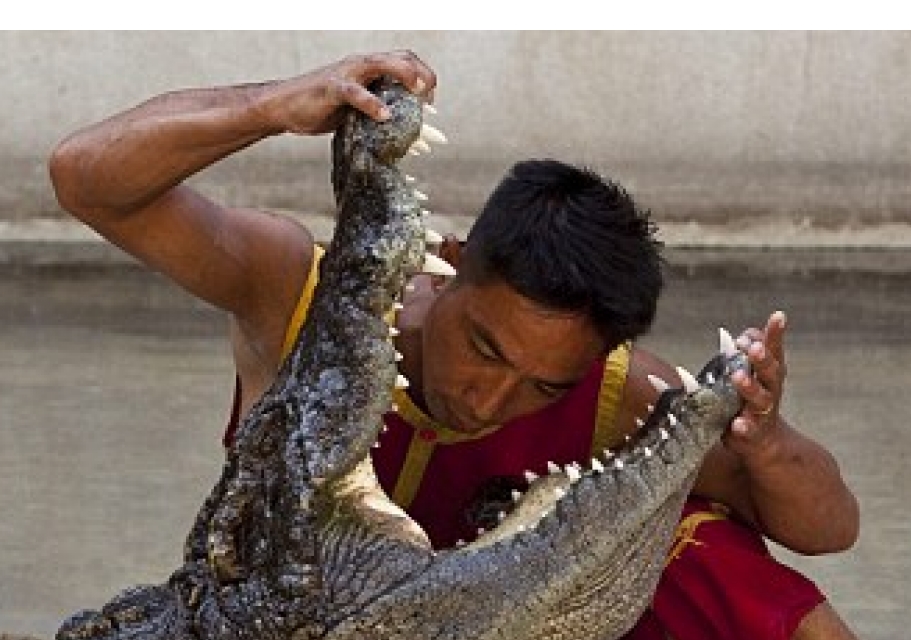 PRO
The daily grind at the office may not seem so bad after viewing these startling images. For, no matter how grumpy your boss may be this morning, at least you aren't actually risking life and limb by sticking your head in his jaws. But that is exactly what the crocodile wrestlers at a Thai zoo do on a daily basis.

This astonishing series of photographs shows the men at the Samphran Elephant Ground and Zoo performing what may well be the world's most dangerous job. The wranglers have been performing the stunts at the zoo on the outskirts of Bangkok, Thailand, since it was set up in 1985. During the hour-long shows they stick their head between the jaws of some of the zoo's biggest crocs, in the style of Krai Thong, a legendary Thai crocodile hunter.

Photographer Bronek Kaminski, who witnessed the feat on a trip to the attraction, said: 'They are quite lively crocodiles. They are not lying around half asleep all the time. 'They are chomping at a bamboo stick and snapping their jaws and then they guys put them into some sort of trance and put their head into the croc's mouth.

'He keeps it in there for a long time, and puts his arm in, right up to his shoulder. Then the crocodile goes back to being a wild animal. It's very impressive. I was not sure if they were actually going to do it so when they do you are really taken back by it.'

The centre also doubles up as a breeding zoo, and has more than 10,000 crocodiles.

On the other hand, Lucy form Sunderland wrote about these shows:

CONTRA
"I just came home from Thailand, and we saw a crocodile show as part of a tour around an island. It was awful, all us Brits wanted to walk out but were stuck. The crocs were overcrowded in their cages, injured and untreated, one had a giant abscess the size of a football on its foot and was still made to perform.

The crocs were not agressive and were pulled time and again onto the ring by their tails- they were just trying to crawl away again. They were teased and hit until they open their mouths in this way - and they stay like that as long as you want them too, this is a very easy feat as long as you don't touch the sides, they even sleep this way.

One of the saddest things I've seen for a long time, if you visit Asia please dont visit the elephant, snake, monkey, crocodile shows - they make you despair for the human race that this is called entertainment!!!

I'm so glad the UK has laws again this happening here."

What do you think? This is nothing more than animal abuse or it's a good show for everyone.