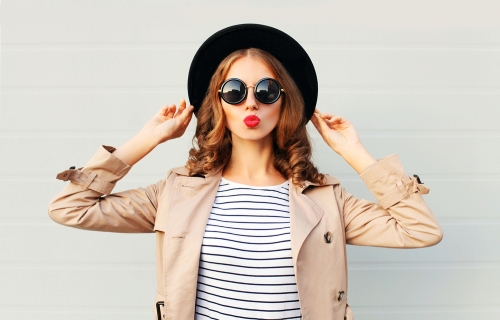 Even if you are not really interested in fashion, or you don’t know what is fashionable, there are some words and expressions to talk about clothing. We are going to have a look at them now.

Sleeve: The sleeve is the part of a shirt that holds your arm. Shirts, sweaters, sweatshirts, and coats all have sleeves.

Crew-neck: T-shirts don’t have a collar, not the kind you use for a tie. They are what we call crew-neck shirts. Crew-neck describes any shirt with just a round hole for your head. T-shirts are the most common crew-neck shirts, but you can also buy crew-neck sweaters.

Turtleneck: If you wear a shirt that has what looks like a third sleeve for your head, you’re probably wearing a turtleneck.

Old-fashioned: Do you know anybody who likes things the way they were fifty or a hundred years ago? Old-fashioned is the opposite of modern.

Modern: Modern means recently made, or with a new design.

Trendy / Fashionable: When we talk about clothing, we don’t normally say modern. Because tastes change almost every month, the newest taste in clothing is called trendy or fashionable.

Trend: You can use the word “trend” for more than clothing. A trend is the direction things are going, or the newest thing.

Non-conformist: Almost everyone knows what the newest trend is, or what the current fashion is, but there are a lot of people who try to wear clothing that is the exact opposite of what is fashionable. We call these people non-conformists.