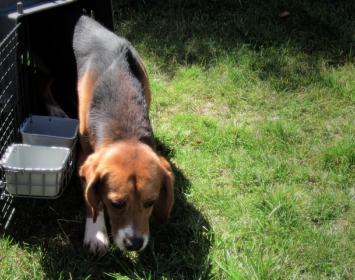 It is a story about 41 beagles that were rescued from a research lab in Spain. There were actually 72 of these beagles. Thirty-one of them were adopted in Europe and the remaining 41 were brought to Los Angeles via the Beagle Freedom Project.

Apparently, because of the beagle’s friendly and docile nature, the breed is a popular choice for research labs. The dogs in Spain, as with others used in research around the world, had lived their entire lives in cages without human or canine companionship. They’d never played with squeaky toys, chased balls or even touched grass.