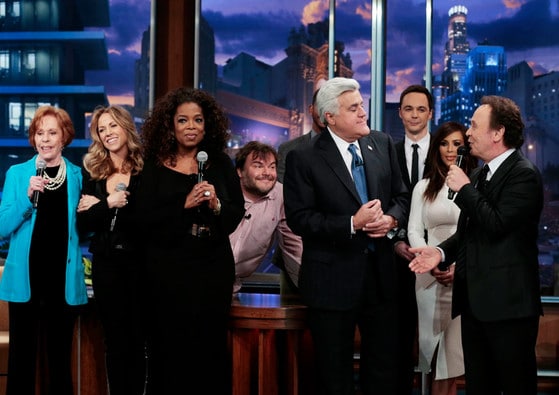 So long farewell! Kim Kardashian sings out legendary host Jay Leno on his last episode of The Tonight Show

You would think they would pull out all the stops as his 22 year stint at the top came to an end. But poor Jay Leno had to endure Kim Kardashian’s singing on his last ever episode as host of The Tonight Show. The reality television personality gave it her all as she shrieked her way through a spectacular Sound Of Music themed Farewell Song. She was just one of a cadre of stars who sang as a member of the Shut Your Von Trapp Family during the Billy Crystal arranged ditty. Generous Jay seemed pleased with her effort, and thankfully a host of other stars were also involved. But while the singing and dancing was one of the highlights, there was plenty of other fun on the watershed show.

He said: “I don’t like goodbyes – NBC does. I don’t care for them. Being together all these years… very close staff. It’s kind of like graduating high school. A high school for very stupid people that have been together for 22 years. I gotta tell ya The outpouring from people really has been touching. Today Anthony Weiner sent me a photo of his penis looking sad.”

And he referenced his infamous feud with his CBS rival, who was raging when Jay replaced Johnny Carson at his expense. Jay said: “Over the years people wanted to know whether Letterman and I actually dislike each other. That’s not true we like each other, we’ve had a long relationship. We both realize people don’t want to turn on late night TV and see millionaires fighting. That’s what Republican primaries are for.”

He also made fun of the fact his stints had been book-ended by the scandalous private life of one of the UK’s top actors. He said: “It was revealed this week that in the past couple of years Hugh Grant has fathered three children with two different women. How ironic is that. I end my run the same way it began asking Hugh Grant, what the hell where you thinking? 22 years later I ask him the same question.”

And he even found time to land a verbal jab against the President of the United States. He said: “The worst thing about losing this job, I’m no longer covered by NBC, I have to sign up for Obamacare. When I started Justin Bieber wasn’t even born yet, that’s why we called it the good old days.”

Thursday heralded the end of an era when Jay Leno pulled into the NBC Studios in Burbank, California for the final time. Arriving to tape the last ever episode of The Tonight Show, the 63-year-old appeared upbeat as he signed autographs and flashed a peace sign to waiting fans.

Tributes have poured in from stars who have appeared on his show over the years, including Sandra Bullock who made an emotional appearance on the penultimate episode of the programme which aired on Wednesday.

“I’d like to say something. I’m going to start crying,” the teary-eyed 49-year-old said taking Leno’s hand. “You’ve always been so kind. That’s saying a lot in this business, because we like to be mean. There’s not been one time you haven’t treated me like I had something to offer – even when the film [I was promoting] was awful and you knew it, you never let me see it in your eyes.”