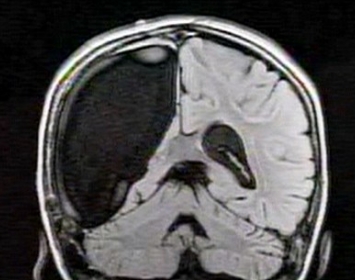 Nine-year-old Cameron Mott had half her brain taken out during major surgery, but it has not stopped the youngster pursuing her dreams. Cameron has stunned doctors and her family with a miraculous recovery from the radical surgery and now wants to become a ballerina. The nine-year-old developed the brain disorder Rasmussen’s syndrome at the age of three, which saw the disease eat away at the right side of her brain.

This triggered violent epileptic fits and seizures, which doctors eventually said could only be prevented by removing half of her brain. “It was very scary, because you just can’t imagine what your child will be like after such a dramatic brain surgery,” mother Shelly Mott told Ann Curry on NBC’s Today Show. “It just doesn’t seem like they can be the same child. It was absolutely the right choice. And, really, for us, when we knew what she had, and we knew that this was our only option to help her, the risk was something that we were willing to deal with because her quality of life was so poor.”

Cameron has recently finished her physiotherapy and can now run and play, with a slight limp. The school girl also lost some of her peripheral vision. Doctors knew that removing the right side of the brain – which controls the left side of the body – meant she would be paralysed when she woke from surgery. But they also knew that childrens’ brains are capable of rewiring themselves and taking over functions.

Cameron walked out of the hospital four weeks after her surgery. When asked if she had any lingering effects from the surgery, Cameron said, “No. None at all.” Asked what her goals were, Cameron said: “I want to be a ballerina when I grow up.”

Rasmussen-syndrome
A brain disorder caused by inflammation of brain cells in one hemisphere. Its cause is unknown. Rasmussen syndrome causes seizures often difficult or impossible to control with medication, and eventually results in brain shrinkage (atrophy). Treatment is with surgery, if possible. The inflammation seems to stop of its own accord eventually, but the damage done is irreversible.