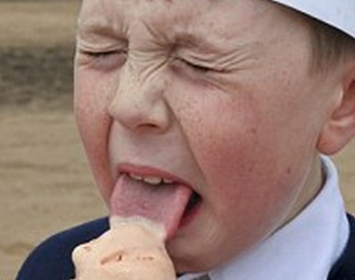 Parents are constantly trying to come up with inventive ways of persuading their children to eat vegetables. But one way they probably won’t be trying is by disguising them in ice-cream. A group of schoolchildren were given the dubious honour of tasting a new range of vegetable-flavoured ice-creams created as part of this year’s Southport Food and Drink Festival.

Organisers of the festival have created two new ice-cream flavours – tomato and basil and spring asparagus – in celebration of the seaside town’s abundance of the crops. But it was up to eight Holy Trinity Primary School students, aged between 7 to 11, to decide which of the new tastes they liked best as the flavours went head to head in a MasterChef style competition.

However the judges, who were asked to guess the flavour of the savoury treats, were left unimpressed by the ice-cream. One student described the desserts, which were created using local produce by Mrs Dawson’s ice-cream, as ‘disgusting’ while another said it was a ‘big shock’ to taste such an innovative flavour. Even more surprisingly, one judge confessed to not knowing what asparagus was, after admitting he thought the green ice-cream was going to taste of mint. He said: “When I saw green I thought it was going to be mint, it was a big shock! What is asparagus?”

Despite most of the judges being uncertain about the flavours, they eventually decided that asparagus would be the official Southport ice-cream for this year’s festival. Sarah Carter from Sefton Council said: “Ice cream is a traditional favourite in Southport and we wanted to give it a modern twist for the Festival. It will be great to see what the young people think, and to see if we can get them to eat more vegetables, even if it is through ice cream!” Mrs Amanda Dowson from Mrs Dowson’s ice cream added: ‘Ice cream is a very flexible product that can lend itself to a fantastic range of flavours. “We have had a lot of fun developing these new flavours that epitomise Southport, and are looking forward to seeing the reactions in the taste tests!”

Nézd meg ezt is:  Are you ready for Super Bowl Sunday? Facts and Fun Facts about Super Bowl

Southport Food and Drink Festival is owned by Sefton Metropolitan Borough Council and delivered in conjunction with Edge Street Events.