There are many spas and hot springs in the world, but nothing compares to the largest thermal lake in Europe, one of the many natural wonders of Hungary, Hévíz. The town is situated in south-west Hungary, just at the corner of Lake Balaton, around 200 kilometres from Budapest.

The origins of the lake go back to ancient times when Lake Balaton and the basalt mountains around it were formed. The healing power of the water was already known by our ancestors.

Its total water stock is replaced every three days, as the springs produce 35 million litres of water every single day. Hévíz Lake is a unique phenomenon because other hot water lakes are generally situated in places of volcanic origin, in clay or rocky soil, whereas this is a spring lake with a peat bed.

The spring providing water for the lake is rich in minerals and stems from a cave where hot and cold water have been mixed for thousands of years. Because of the composition of the temperature and the quality of the carstic springs, the water has been used for medical purposes for centuries. The first bathing house was built on rafts in 1772 by György Festetics. The water contains an equal proportion of dissolved and gaseous substances, it is rich in carbonic acid, sulphur, calcium, magnesium and hydrogen carbonate.

The water temperature may reach 23-25 degrees in winter, and 33-36 degrees in summer. The water of the lake moves constantly. It moves from left to right, and also warm water moves upwards while cold water goes downwards. This two-way flow leaves a special massaging effect on the human skin. The depth varies from 100-150 cm close to the shore to 38 m in the centre. 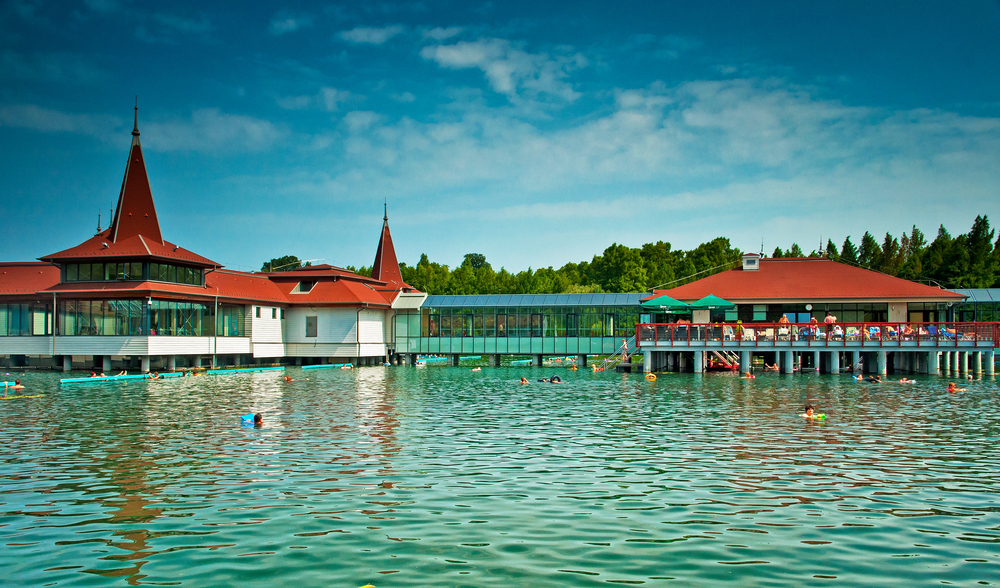 In winter, it provides a spectacular and unique experience when the condensed steam forms a steam cap on the top of the lake’s surface. It prevents the water from cooling down and at the same time a natural inhalatorium is formed. Hydrogen sulphide is released into the air, which has medical effects on vocal chords when inhaled.

There are also many legends about the lake. One of them is a love story of a commander and the daughter of Tátika castle’s castellan. The commander of Csobánc saw the girl quite often leaning on her elbow at the towers of the castle. Because the two castellans were enemies, the commander went to fight for the girl. Only when he won the fight, was it revealed that the young lady was lame in both feet. An old woman suggested that they should move by the lake, so they built a house by the shores of Lake Hévíz and the young woman could often dip her legs into the warm water. A few weeks later her feet were healed and the couple lived happily ever after.

Legend or not, we can declare that Hévíz is for the happiness of many people. Nordic walking, bike tours, walks in the town, or besides the lake, trips to the wine cellars all strengthen the body and the soul.

The main sights around are the Roman ruins, the Festetics Palace in Keszthely, the fortresses of Sümeg and Rez, and the Tapolca cave lake. Wine tasting is also a popular activity, and to start your tasting journey you should without doubt go to Egregy. It is a particular part of the town with a unique atmosphere. The tradition of wine-making on Egregy hill goes back to the Roman era. Although later, during the Turkish invasion, the village was destroyed, and in the seventeenth century German settlers populated the area again.

The warm and sometimes hot soil and the favourable climatic conditions guaranteed the production of excellent quality wine. It is a special region of white wines, but still, there are certain types of red wine grapes planted as well. The most remarkable and well-known wines of the region are, Olaszrizling, Szürkebarát, and Rizlingszilváni, but we can find Zöldveltelini, and some types of Muskotály, too.